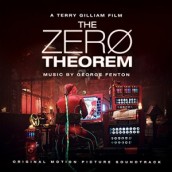 Even if Terry Gilliams' movies have plunged down the rabbit hole, his FISHER KING composer George Fenton hears the old dystopian brilliance

When you think back to Terry Gilliam’s latter good old days with THE FISHER KING, TWELVE MONKEYS and arguably FEAR AND LOATHING IN LAS VEGAS, the directors’ movies worked so strikingly well by being simultaneously mind-blowing and nightmare-inducing acid trips, unleashing exaggerated performances and imagery that tended to turn the world into a dystopian wonderland. It’s a sad sign of how far Gilliam has fallen since THE BROTHERS GRIMM that BRAZIL and TWELVE MONKEYS have gotten upchucked as THE ZERO THEOREM which equals near insufferability – though not without Gilliam’s seemingly unbreakable visual talent on display. But the one element of ZERO THEOREM which adds up quite wonderfully is its score by George Fenton, who last took a more wildly traditional approach for Gilliams’ crazy medieval quest in modern day Manhattan for FISHER KING. With ZERO pretty much set in the same universe that uses Central Services, Fenton imaginatively plunges into the addled mind of a math-obsessed civil servant pursuing a computer-enhanced dream woman. It’s a mesmerizing pursuit for Fenton as he uses mind-bending bells, crazed electronic-analogue samples, techno hip-hop and merry-go-round melodies to create a soundscape quite unlike anything he’s ever done in a mostly symphonic career, though strings do provide the melodically binding force here. It’s a pleasant contrast to the movie’s spastic, indecipherable antics, the musical equivalent of the Soma that being hooked up to virtual reality provides, yet with a sad, poignant quality for anguished solo violin that reflects how hollow the babbling hero’s sensuous illusion is.

At its best, Fenton’s THEOREM sounds like a squeezebox steampunk dream machine cobbled together out of old instrumental bits and parts, doing its best to stave off a mental breakdown, but unable to hide the madness it’s running on. A sultry, 40s style lounge version of “Creep” provides another neat touch for Fenton’s mesmerizing future shock, which is easily the only good trip worth taking within Gilliam’s otherwise hallucinogenic mess of used parts from far better movies. Indeed, good is Fenton’s work at finally suggesting salvation that you wish it could scoop up the filmmaker along with it.

Click on the link to Purchase THE ZERO THEOREM soundtrack