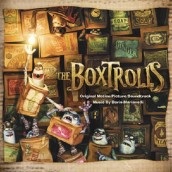 With his impressively elegant use of a full, assured orchestra, the Italian-born, English-based composer Dario Marianelli hasn’t had to scavenge for major assignments, as such epically romantic historical scores like ATONEMENT, AGORA and ANNA KARENINA have proven, along with the mythic genre scores for THE BROTHERS GRIMM and V FOR VENDETTA have shown. But even that latter film’s shadowy, dystopian-busting superhero doesn’t strike fear into the hearts of a morally bankrupt (and cheese-obsessed to boot) town like THE BOXTROLLS, its delightful score marking Marianelli’s first venture into perhaps not-so tyke friendly territory.

Laika, the producer-animators of BOXTROLLS have always had a weird taste when it came to scoring their off-kilter stop-motion subjects, whether it be Bruno Coulais’ surreal fantasy approach to CORALINE or Jon Brion’s eccentric send up of 50s horror music in PARANORMAN. Marianelli’s approach to BOXTROLLS effortlessly veers between wackadoo music, eccentric creeping about and truly fearsome symphonic menace. Marianelli conveys the titular creatures for the sweet scavengers they are with loads of chiming percussion, his spooky-ooky tunes getting across their gibberish bark that’s far worse than its bite. But best of all, BOXTROLLS offers a bounty of themes that seamlessly tie together its grab bag of styles, whether it be rampaging suspense, clanging, cliffhanging peril cheesefest accordions or a brassy Viennese waltz. Yet there’s an undeniable, heartbreaking quality to Marianelli’s main theme as it personalizes a little boy lost to the far crueler human world above. It’s a nice, emotional potency that gives THE BOXTROLLS a mature power, no matter the nuttiness at stop-motion hand. But more often than not, BOXTROLLS is about Marianelli unleashing his Halloween-loving child at heart, the sense of fun that knows the monsters under the bed offer nothing but love in spite of the real adult darkness about them.

BOXTROLLS offers wistful, Devotchka-esque tunes by Loch Lomond that serve as catchy pleas for creature tolerance, a theme that extends to a charming spin on the kindergarten standard “Whole World.” Far more deliciously evil in a nursery rhyme vein is “The Boxtrolls Song,” with Sean Patrick Doyle doing his cross-dressing, Kurt Weil best in appealing for ogre annihilation, a song at once hilarious for its “Three Penny Opera” affectations as it is truly terrifying in recalling a Germanic-toned appeal for annihilating the seemingly ugly “other – an idea that proves “Boxtrolls” as anything but kid’s stuff when it comes right down to the inside of it.

Click on the link to Purchase the BOXTROLLS soundtrack