Home » The Hobbit The Battle of the Five Armies movie review 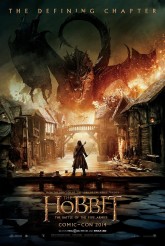 Movie Review: THE HOBBIT: THE BATTLE OF THE FIVE ARMIES 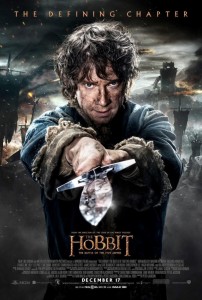 Steal from a dragon, lie to a wizard and underestimate Peter Jackson at your peril. The filmmaker, who first managed to get J.R.R. Tolkien’s sprawling LORD OF THE RINGS trilogy to fit into three movies that are cumulatively magnificent, has turned Tolkien’s brief prequel, THE HOBBIT, into three more movies. Amazingly, the finale, THE HOBBIT: THE BATTLE OF THE FIVE ARMIES, doesn’t feel at all padded, despite the fact that director Jackson and his fellow screenwriters – Fran Walsh & Philippa Boyens & Guillermo del Toro – are working from less than a third of a very short novel.

There’s no attempt at catch-up or prologue here, but that’s no problem. Even someone who hasn’t seen a frame of the other HOBBIT or RINGS movies will quickly grasp what’s happening. As BATTLE opens, the dragon Smaug, voiced and motion-capture-performed by Benedict Cumberbatch, is furious that his lair has been invaded by a group of dwarves, plus the very resourceful hobbit Bilbo (Martin Freeman). In revenge, Smaug sets out to destroy the nearby human community of Laketown. Since Smaug flies and breathes fire, and Laketown is made of wood, the odds are in the dragon’s favor.

It doesn’t take long for both elves and orcs to learn that Smaug has left his treasure horde; yes, it’s now occupied by Thorin, but he seems a lot less formidable to potential invaders than Smaug did.

There’s also Bard the Bowman (Luke Evans), a Laketown resident who rises to the occasion again and again, even though he doesn’t want to be a leader, plus the love triangle of dwarf Kili (Aidan Turner), elf warrior maiden Tauriel (Evangeline Lilly) and Tauriel’s elf prince suitor Legolas (Orlando Bloom).

Things end up very much as they do in Tolkien’s book, though circuitous routes are taken in some places. Characters that only appear in print in the RINGS trilogy, like Legolas and Saruman (Christopher Lee), are worked in very well, presaging what we know will happen later while serving valid plot functions here. In the case of Legolas, as well as Tauriel (who doesn’t exist in print in either THE HOBBIT or the RINGS cycle), this also allows for lots of rousing elf action in many confrontations with orcs.

Jackson stages clashing armies splendidly, and Smaug is as fearsome a dragon as has ever flown across the screen. However, it’s the character study aspects that are especially striking here. Armitage and the screenplay give Thorin an almost Shakespearean quality of someone falling into greed and desperation for glory, then seeking agonized atonement. Freeman is perfect as Bilbo, wanting to do the right thing but subject to some temptation himself. Ian McKellen is likewise everything that Galdalf the wizard should be; for those tracking the performance backward from the RINGS films, this Gandalf is a little easier to surprise and a trifle less bossy than his later incarnation.

Also worthy of mention are Lee Pace’s shrewd, cool King of the Wood Elves and Manu Bennett and Lawrence Makeore in two excellent motion-capture performances as especially nasty orcs (the moniker “Azog the Defiler” makes us wonder exactly what was done to earn it).

There is great warmth and fellowship here. Indeed, the bond between Bilbo and his dwarf friends is such that it seems a bit odd that in RINGS, he goes to the elves rather than the dwarves in his retirement.

THE HOBBIT: THE BATTLE OF THE FIVE ARMIES doesn’t have the thunderous sense of revelation that Jackson engendered in the RINGS films. However, it has breadth, scope, thrills, glorious setpieces and real emotion. Jackson and Co. have taken a small bit of story and made it into something worthy of feature-length life, and that’s as magical as anything within the film itself.

Related: Movie Review: THE  HOBBIT: THE DESOLATION OF SMAUG