Home » The Hobbit The Desolation of Smaug movie review 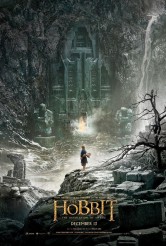 Movie Review: THE HOBBIT: THE DESOLATION OF SMAUG

On one level, filmmaker Peter Jackson and his loyal companions have a problem uncommon in book-to-film adaptations. Most of these require that large chunks of the source material be removed or at least condensed and altered to fit into a running time that won’t accommodate all the details of the book. With the three HOBBIT movies – last year’s THE HOBBIT: AN UNEXPECTED JOURNEY, the current THE HOBBIT: THE DESOLATION OF SMAUG and next year’s THE HOBBIT: THERE AND BACK AGAIN – Jackson and company have taken a relatively small novel and stretched it into not one but three great big fantasy films.

Jackson, as with UNEXPECTED JOURNEY directing from a screenplay he wrote with Fran Walsh, Philippa Boyens & Guillermo del Toro (Walsh and Boyens collaborated with Jackson on the scripts for the LORD OF THE RINGS trilogy as well) based on J.R.R. Tolkien’s novel, keeps the action thundering along, even though an analysis of the plot reveals that it’s taking several groups of characters a very long time to accomplish a few goals. Most of the characters are easy to like and the action is usually imaginative. Now and again, we feel like maybe the characters could have taken one less tumble or thrown two less punches, but overall, it races along.Jackson’s sense of conviction in this world never wavers and it carries us along with it.

For those who somehow missed reading any of Tolkien’s books about Middle-Earth, never saw the LORD OF THE RINGS trilogy, skipped AN UNEXPECTED JOURNEY and are walking into THE DESOLATION OF SMAUG cold, surprise – it’s easy to understand what’s happening. An opening scene gives us the first meeting between the wizard Gandalf (Ian McKellen) and exiled dwarf royalty Thorin Oakenshield (Richard Armitage). Thorin wants to reclaim his hereditary kingdom, which has been taken over by the dragon Smaug. Gandalf strongly encourages Thorin to take action against Smaug, even going so far as to provide a burglar.

The action jumps ahead a year, with Thorin, his party of dwarves, Gandalf and the “burglar,” hobbit Bilbo Baggins (Martin Freeman), all fleeing a band of murderous orcs. We follow our heroes, together and separately, as they travel through the realms of elves, monsters, humans and of course into Smaug’s very impressive lair.

Those who are familiar with the original trilogy – most of which takes place sixty or so years after the events of THE HOBBIT – will know that certain characters definitely survive to battle evil another day, but the filmmakers get them all into hair-raising predicaments nonetheless. There is also quite a lot of heroic mayhem committed by elves, principally Legolas (Orlando Bloom) and new character Tauriel (Evangeline Lilly). Both of them are shown to be such spectacularly successful fighters that their sequences teeter on the edge of parody. We know that elves can be swift and lethal, but it starts to seem like overkill. Tauriel also serves another narrative purpose that’s not in the source material, but actually weaves well enough into the rest of the movie.

The dialogue is flowery and often on the nose. The actors deliver it with the kind of seriousness and spirit of translation that is often brought to Shakespeare – they intend the audience to mentally turn this formal speech into something comprehensible to modern ears, but they remain in the language of the piece. There’s something endearing about the spirit of the cast, whether it’s Lee Pace as a sly elf king attempting to manipulate what’s happening or Ken Stott’s wise dwarf Balin. Everybody (with one or two notable exceptions) is in the same magical realm here. Freeman arguably gets the best dialogue in the film when he’s trying to talk with Smaug, investing Bilbo with all the fear, pluck and astonishment the character should have.

Benedict Cumberbatch, who voices Smaug and did some motion capture – there is something of the actor in the way the saurian narrows his eyes – is an impressively lordly dragon. He also provides speech and form for the ominous Necromancer.

THE HOBBIT: THE DESOLATION OF SMAUG is a bit physically darker than other films in the series, since a lot of the action takes place underground, by night, in the mist or some combination thereof. It’s handsome to see, but at times the CGI-enhanced sets resemble really good videogame backgrounds more than we might like. This said, the production design embodies what we expect Middle-Earth to look like, with a number of imaginative flourishes and plenty of areas that lend themselves to fights and chases. The 3D is mostly unobtrusive but fine, with the 48 frames per second format of AN UNEXPECTED JOURNEY mercifully gone (at least in the screening I attended, though some theaters will still be showing the 48 frame format).

THE HOBBIT: THE DESOLATION OF SMAUG is most definitely a middle, rather than a standalone piece. It’s not necessary to have seen JOURNEY first, but DESOLATION ends on a cliffhanger. This is fine. The movie is good fantasy action fun, made by people who really care and know what they’re doing. It doesn’t so much illuminate the other trilogy as simply add to its world – people who want to spend more time in Middle-Earth, THE DESOLATION OF SMAUG is for you.