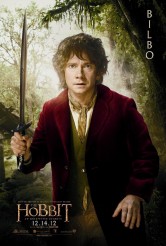 An adaptation that has much of the expected Jackson/Tolkien magic, but marred by the optical process 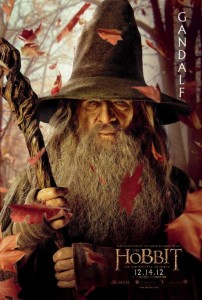 There’s a lot to love about THE HOBBIT: AN UNEXPECTED JOURNEY, particularly for fans of director Peter Jackson’s LORD OF THE RINGS films. Like that astounding fantasy trilogy, THE HOBBIT: AN UNEXPECTED JOURNEY is based on the work of J.R.R. Tolkien – THE HOBBIT actually came before LORD OF THE RINGS in Tolkien’s work, but it was caught up in an epic rights entanglement (doubtless some Tolkien-loving parodist will tackle the subject some day – LORD OF THE FILM RIGHTS, anyone?).

In any event, Jackson is back in the director’s seat, having adapted the script with RINGS colleagues Fran Walsh & Philippa Boyens, plus Guillermo Del Toro, who was originally supposed to direct THE HOBBIT. RINGS composer Howard Shore is back with his memorable themes, the soothing warm music telling us we’re back in the Shire before we even see it, the unsettling tones that accompany the appearance of the One Ring, the wonder and yearning that surrounds the Lady Galadriel (Cate Blanchett). This is legitimate way to give us more of what we so enjoyed on the big screen in 2001 through 2003 without in any way harming our memories.

Indeed, THE HOBBIT: AN UNEXPECTED JOURNEY – the first in a new trilogy – sets the stage for what we know will follow in RINGS. The characters may not know what the portents from the dreaded east signify, but we do, at the same time that we don’t know too many specifics to spoil the suspense.

As with RINGS, THE HOBBIT starts out with a huge smashing battle. This one, as our narrator Bilbo tells us, concerns the dwarf kingdom of Erebor, which has to contend with orcs and is then annexed entirely by the gargantuan dragon Smaug, who covets the dwarves’ treasure.

The elderly Bilbo Baggins, played as he was in the trilogy by Ian Holm, is setting down a chronicle of his adventures for nephew Frodo (Elijah Wood). In a nicely smooth transition, we are taken back to when Bilbo was a younger hobbit, played by Martin Freeman. Bilbo has adventure deep down in its soul, but like gold, it has to be dug out by dwarves. Not to worry – dwarf Prince Thorin (Richard Armitage), with twelve dwarf companions, seeks to reclaim the lands (and precious metals) his family lost sixty years ago. The wizard Gandalf (Ian McKellen) has recommended Bilbo to the dwarves as an expert burglar. Bilbo fancies himself nothing of the kind, but winds up swept along on the quest all the same.

How much one enjoys Bilbo’s joining of the dwarf band and all that follows has a lot to do with how much one wants to be re-immersed in Middle Earth. Jackson and his co-writers miss no opportunity to expand on Tolkien’s suggestions. The novelist may have jotted down a line about giants fighting in a storm as a background note, but be assured it’s a whole sequence here. Sometimes this threatens to be too much of a good thing, but sometimes it’s just perfect. The scene between Bilbo and Gollum (the indispensable Andy Serkis, returning to the role) is sublime, with notes of terror and hilarity and pathos all tumbling out together. The interaction between the two characters feels neither rushed nor overly drawn out, but simply takes exactly as long as it should.

The dwarves’ song of yearning for their stolen home sounds exactly what our subconscious tells us a somber dwarf song should sound like and realms we haven’t seen before, like a goblin mine, look just the way we’d suppose it should look here.

Speaking of looks, though, there are several schools of thought on the 48 frames-per-second technology (normal film runs at a rate of 24 fps) that has been applied to THE HOBBIT, which is being shown in this controversial format at select theatres. One group of viewers hails the clarity and detail of this new frame rate. Others – this reviewer among them – thinks it makes the whole movie look like videotape. DOCTOR WHO is great, but one doesn’t want our return to Middle Earth to look like the TARDIS should be dropping into view at any moment. By all means, seek out a theatre showing the film at the standard 24 frames per second, which ought to give THE HOBBIT the intended thrilling visual aspect. As for the 3D, it is fine, though it doesn’t add anything necessary.

Because THE HOBBIT doesn’t have the kinds of relationships that were present in THE FELLOWSHIP OF THE RING – the friendship among the hobbits, Aragorn’s ambivalence about his stature in the world, Boromir’s growing resentment – the emotional glue here comes from Bilbo’s growing decency and nostalgia inspired by Gandalf and several other key players from RINGS. The results aren’t quite so resonant, but the right notes are still being played, and we certainly come away fond enough of the characters and invested enough in their world to want to come back for more when it’s ready.

Tags: Ian Holm, Ian McKellen, J.R.R. Tolkien, Lord of the Rings, Martin Freeman, Peter Jackson, The Fellowship of the Ring, The Hobbit, The Hobbit review, The Hobbit: An Unexpected Journey