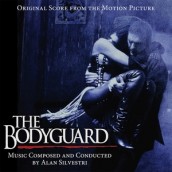 It’s a great thing to be a composer on a diva-driven film whose soundtrack will go through every precious metal LP there is to hang on a best-selling wall. Not so much for score fans hoping to hear the underscore amidst the pop hits, but for the musician who has one or two contractually mandated cuts that will give him a taste of the platinum pie.

Now twenty years after the release of THE BODYGUARD, and several months after the sad death of its superstar Whitney Houston, those who are equally enamored of Alan Silvestri have finally gotten their complete slice of the composer’s piece of romantic noir with THE BODYGUARD soundtrack. While he’d previously played creeping suspense for such thrillers as SHATTERED and RICOCHET, THE BODYGUARD offered a set-up straight out of a Bogey picture from the 40’s, the private dick protecting a little lost woman-girl against those intent on doing her harm- a formula that writer Lawrence Kasdan updated into a singing superstar who’s shielded by a lonely gun for hire.

Yet there’s a lush, black and white feeling to Silvestri’s surprisingly pensive work, a cigarette-smoke drenched quality that starts off with a beautifully melancholy, trumpet-driven theme that could just as well be guarding Faye Dunaway on the streets of CHINATOWN. The score takes its delicate time at drawing this odd couple together, particularly for a film that thankfully never made their race an issue. Heard mostly from crew-cut Costner’s viewpoint, THE BODYGUARD conjures an ex-military man afraid of commitment, a job-dedicated solemnity which gradually opens up to the point where Silvestri can get in soaring, Copland-esque Americana when they shack up at her Lake Tahoe retreat.

But there’s more than a share of Silvestri’s trademarked, sustain spookiness at hand amidst the brass and delicate pianos to satisfy even those fans whose taste runs more to PREDATOR. While there’s not a far-more familiar note of Whitney or Kenny G. to be found here, THE BODYGUARD impresses for its subtlety. La La Land’s expanded release truly has Silvestri fans’ back with the complete score and its alternates, along with Tim Grieving’s liner notes that get the scoop from director Mick Jackson and composer Alan Silvestri about providing able support to one of the biggest pop movie, and soundtrack hits of all time, as well as a moving remembrance of its star.