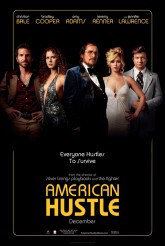 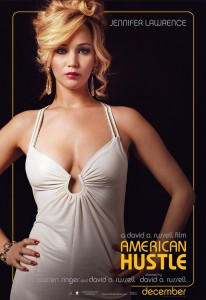 It’s hard to do a good story about con artists. The con has to be plausible, the players have to be engaging, and the payoff has to be something that neither the marks nor the audience see coming. AMERICAN HUSTLE is a great example of the genre, piling twist upon twist, mentioning about halfway through which real-life incident it’s loosely about, and playing with us so that we’re not sure until the very end who is on whose side and how it’s all going to shake out. Moreover, we get five terrifically delineated main characters, plus Louis C.K.’s much put-upon FBI boss.

Director David O. Russell, his fellow screenwriter Eric Warren Singer and actor Christian Bale get us on the movie’s side immediately, even if we’re not quite sure what to make of Bale’s character Irving Rosenfeld. We meet Irving as he is doing battle with a complicated comb-over and a hairpiece. It’s 1978 and Irving is a con man who specializes in fake investments. At a party, he meets the lovely Sydney Prosser (Amy Adams), who shares Irving’s taste in jazz – and in con jobs. The two are a fabulous team in love and in white-collar crime …

Until the Feds descend. Special Agent Richie DiMaso (Bradley Cooper) offers a deal – freedom in exchange for entrapping some of Irving’s clients. Irving and Sydney agree, only to find themselves in an ever-escalating situation involving major politicians and the Mafia. Added to this is a romantic triangle (which turns out to have more than three corners), with Richie hot for Sydney and the audience not sure of Sydney’s true loyalties.

The twists in the very smart script by Singer and Russell keep surprising us. One of these is the revelation that we’re watching a “what-if” about a real FBI sting – those old enough to remember it (and who haven’t been spoiled) will feel a moment of astonishment on hearing exactly what’s going on here.

However, even the splendid plot construction plays second fiddle to the terrific characterizations. Bale, who’s sporting a paunch and that startling hairstyle to play Irving, is such a hearty, streetwise New Yorker that he seems as at home as a young Robert De Niro or Harvey Keitel would be. Irving is simultaneously confident and anxious, adoring and frustrated, nobody’s notion of a superhero and almost everyone’s idea of a medium-time hustler, and Bale nails him hilariously and superbly. Adams keeps us guessing about exactly what’s going on in Sydney’s mind even as she makes us admire the woman’s powers of persuasion and illusion. Cooper as the hot-headed, defiant Richie also gets a lot of great moments. Jeremy Renner, as a good guy whose hand is in the cookie jar for mostly altruistic reasons, brings a sense of innocence and sincerity to his character that makes him very likable. As for Jennifer Lawrence, who plays a woman described by Irving as “the Picasso of passive-aggressive karate,” she is an absolute hoot, as well as being a bit scary.

The production and costume designs are period-perfect and the song choices are impeccable. Why has it taken this long for somebody to use the song “Dirty Work” to accompany onscreen scamsters practicing their trade?

There’s never a dull moment in AMERICAN HUSTLE and the pieces all fit together. At the end, a lot of the people onscreen have been hustled, but the viewers are all richly rewarded.