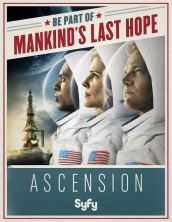 The show runner/executive producer talks about the three-night event 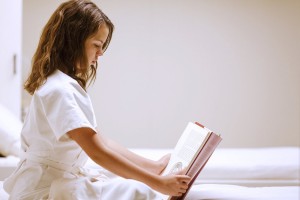 In Syfy’s six-hour, three-night event ASCENSION, which concludes Wednesday December 17, the eponymous spacecraft launched from Earth back in 1963 as a secret project meant to save the human race from nuclear war. The inhabitants of Ascension, now in their fiftieth year of space travel, are halfway to the nearest habitable planet; the older voyagers who are alive now will be very old if they survive to reach their destination. No one has had contact with Earth since shortly after launch and consequently doesn’t know if the world even exists any more.

The people aboard Ascension are still very much trapped in the morals and styles of the Sixties, along with a hierarchic society, pre-arranged marriages (the better to manipulate the genes of the new generation) and other constricting issues. New captain William Derringer (Brian Van Holt) achieved his post by heroism rather than succession, which is a bit of a shakeup to the ship’s order; his wife Viondra (Tricia Helfer) is determined to help him maintain his rank. But there’s a big shakeup when the ship’s first murder occurs. There’s also something major happening that most of the ship’s crew don’t know about, but that the audience finds out at the end of the first night.

Executive producer/show runner Philip Levens talks about the origins and influences of ASCENSION, which was originally created by Adrian Cruz.

ASSIGNMENT X: You’ve said that ASCENSION is based partially on Orion, a real program that was begun during John F. Kennedy’s regime, but abandoned when the president was afraid of what would happen if it was weaponized. Did you find out about Orion and think, “Oh, what would happen if this had gone forward,” or were you already percolating the idea and then came across Orion?

PHILIP LEVENS: I would say it’s a combination. Every kid who loves science fiction dreams of spaceships. And then coming across this sort of secret narrative – secret stories have always intrigued me, so …

AX: How did you hook up with your fellow ASCENSION executive producer Jason Blum?

LEVENS: We were put together by our agents and the studio. They said, “He is looking for something like this,” and I pitched it to him, and he was like, “Oh, my God.” The whole pitch, when he heard it, he was like, “We’re doing this. That’s it.”

AX: Did you talk with NASA at all about the project?

LEVENS: I’ve consulted with a lot of NASA experts, yes. Those guys are great. Their enthusiasm for space travel and for this project is really tremendous.

AX: How much research did you do once you came up with the idea, and what sorts of things did you research?

LEVENS: Closed systems, number one. How do you re-circulate oxygen, [what do you do about] water and food, and what sort of supplies would you need, what kind of machine shops and fabric-making materials? If you’re interested in environmental systems, it certainly fascinates just in that sense alone. It can stand alone like that.

AX: Did you do any research into what NASA is doing now?

LEVENS: There’s really nothing we can really research that would be comparable [to what’s happening on the show]. But it is sort of, again, that secret history. I’ve always been interested in secret histories. The idea that there was a plan to build a ship this size back in the Fifties, when people thought they were going to get on, take their families with them, explore the solar system and come back – that’s what those guys were planning on doing – it’s crazy.

AX: In ASCENSION society, if you were brought aboard because you were a spaceship mechanic, is it assumed that your children will follow in your footsteps?

LEVENS: In general, people do follow in their parents’ footsteps, but it is a meritocracy. If you test well enough on your tests, you can leapfrog over that. But some people don’t believe [the meritocracy] is real. Which might even be the mirror narrative for our own culture.

AX: With the societal restrictions of the Sixties still in place on the ship, I’m assuming any gay characters would be closeted, but are there any?

LEVENS: We deal with all of that, yes. That’s one of the social issues we deal with.

AX: Tricia Helfer is your leading lady. She was previously one of the stars of BATTLESTAR GALACTICA, one of Syfy’s biggest successes. Was she brought aboard in any way because of her pedigree with the network?

LEVENS: We are at the same agency and I had a meeting with her about this, and she was the first person hired. She was great. From the beginning, she was in love with the script, and obviously, I’m a huge BATTLESTAR fan, so I said, “Let’s figure out a way to make this happen.” And the network also was really happy with a reunion.

AX: BATTLESTAR started out as three movies, which were six episodes, essentially, and then went to series. So is that the expectation or the hope that this will happen with ASCENSION?

AX: And Syfy had previously had STARGATE: UNIVERSE, which seems to share some similarities of premise …

LEVENS: At first glance, but we’re very, very different. When you see it, you’ll be like, “Oh, my God, I can’t believe …”

AX: ASCENSION shows a lot of love for literary science fiction, especially in the character names …

LEVENS: There’s a reference to Philip K. Dick, there are references to other [science fiction writers], Dr. Leiber [after Fritz Leiber], things like that. If you’re a fan of the genre, you’ll see all sorts of those “inside baseball” things.

LEVENS: Exactly. To me, [science fiction has] always been America’s literature of ideas.

AX: Is there anything you’d like to say about ASCENSION right now?

LEVENS: Please watch our show. I hope everyone enjoys it and we’re having a blast making it. I don’t want to give away any secrets, but I think it’s going to be exciting.

This interview was conducted at Syfy’s presentation day at the Television Critics Association press tour.