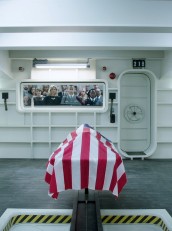 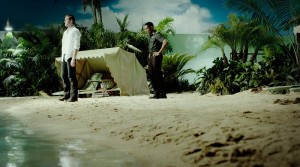 If you are unfamiliar with BIOSHOCK, it is an award winning video game based on an idea that a slew of rich people disgusted with the way America was turning broke off from the Union in the 1930s and decided to settle at the bottom of the ocean and build crazy huge buildings and infrastructures. However, the caste system still exists and there is a huge struggle between the labor and the wealthy but where innovation and experimentation is carte blanche leading to mixed results to say the least.

ASCENSION, on one hand, is a story about a group of travelers that set off in the 1960s on a ginormous spaceship on a 100 year mission to … well, we don’t quite know but presumably to find another planet that can support life and re-start the population of humanity. The ship is 51 years into its journey. The ship is full of crazy sections that would never be found on a current spaceship including a pool, a vast workout area, fancy living quarters (known as the Upper Decks) and poor living quarters (the Lower Decks). Filled with both military personnel, a worker class, hookers, merchants and more – it is an uncanny look at space travel. It is straight out of a DOCTOR WHO episode where a huge spaceship is transporting the last of humanity to some spot and The Doctor must save it from some mysterious, dangerous problem.

On the other hand, the first part of the mini-series (originally slated as a six-episode series but instead presented over three nights in one fell swoop) introduces a main storyline about a notorious woman that is killed on the ship with numerous suspects but not a lot of evidence pointing in one direction or another. It literally serves almost as a “Who killed Laura Palmer” narrative from TWIN PEAKS.

Meanwhile, we are introduced to a cast of characters in the present day on Earth that has knowledge about the ship and that it was launched and how they are keeping tabs on the daily activities. Of course, as the first part of the mini-series progresses we see more evidence that not only do these people have intimate knowledge of the day-to-day activities going on inside the ship, they have a hand in shaping what’s going on. That’s right, ASCENSION isn’t a spaceship at all but a grounded experiment inside a ginormous building under a Petri dish. Now this is supposed to be a big twist in that everyone was really expecting to see this ship actually in space but during the episode they give it away more than once that this is a TRUMAN SHOW happening so the twist falls flat at the end.

With all these moving parts going on it is easy to see how this show may be too bloated to support itself. But in “Night 1” is a good launching point in getting all of these ideas under one roof and the next two installments will be the determination if it can bring everything into a neat bow.

If SyFy is true in its hope to return to what it calls “hard SyFy,” ASCENSION, if done right, could make a good case for being a series that could help that idea come to fruition. But these next few episodes will be the bread and butter that determines if there is a show that could move beyond just a mini-series – in a way that BATTLESTAR GALACTICA did so successfully.