The actor talks playing the captain of a starship 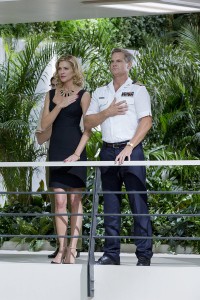 Syfy’s miniseries ASCENSION, which runs in three two-hour blocks this week, is set in space – in the present. In creator Adrian Cruz’s premise, President Kennedy secretly authorized a project to send a number of people on what will be a hundred-year mission to reach the nearest inhabitable planet, which will be the salvation of the human race if Earth is destroyed by the nuclear threat that then seemed imminent.

It’s now fifty years into the journey. The population aboard the Ascension has reached six hundred, though no one aboard has any contact with Earth or indeed even knows if there is still life on the home planet. Most of the original pioneers have died; the current group on the ship will be extremely old, if they’re alive at all, when they reach their destination.

Society here still resembles the Sixties in its fashions, mores and social castes. Brian Van Holt plays newly-appointed Captain William Denninger, married to the ambitious Viondra (Tricia Helfer). Denninger knows that he’s destined to be a footnote in history – the captain who began the journey and the captain who brings the ship onto its new world will be remembered, but he’s the man simply overseeing the middle of the voyage. What he believes is called into question when a murder is committed on the Ascension; as captain, it’s Denninger’s job to investigate.

Van Holt, who is having a busy year with his series regular gig on COUGAR TOWN, recurring roles on THE BRIDGE and AGENTS OF SHIELD and an appearance in the feature film WILD, is at a party thrown by NBC and Syfy for the Television Critics Association. The Illinois native sits down for a short discussion about playing a starship captain.

ASSIGNMENT X: In ASCENSION, is someone born into the captaincy, or how does William Denninger get that job – or is that part of the mystery?

BRIAN VAN HOLT: No, that’s not a mystery. It’s revealed in the pilot, where a heroic act puts me in the captain’s seat. There’s a fire on the ship and a save a bunch of people. My character’s also aspiring to be captain as well, so he finally got there through an act of heroism.

AX: Is it different for you to play a captain, somebody who’s in charge of a lot of other people, and playing somebody who’s either by himself or answerable to somebody else?

VAN HOLT: It’s definitely a departure for me to play this kind of character, and I did not know how to approach it, especially that part about being in control and in charge and responsible for a ship. I am the man of my family, so I kind of relate it to that and just heighten it to something that is obviously more serious with a lot more responsibility. But I’m learning, I’m discovering it as we go along.

AX: Although ASCENSION doesn’t actually take place in the Sixties, the society on the ship seems to be heavily influenced by the Sixties. Have you been looking at any Sixties period films or television or reading any books to get into the spirit of it?

VAN HOLT: I’ve been watching some films, did a lot of research with pictures and whatnot. [Executive producer/show runner] Philip [Levens] told me we come from the Sixties, but we’ve kind of evolved in our own interesting way. We start from the Sixties, and have kind of a Sixties vibe/feel to the way we look, to the ship, to our personalities, to our morals. A lot of it comes from that period, and once again, we’re finding it as we go along as well, because you would evolve, naturally, but we’re trying to find out where do we go from there? We’re evolving and where that ends up, where we go, we’re discovering that.

AX: Is there any of that, “Look, we have a computer that fits in a single room” attitude toward technology?

VAN HOLT: [laughs] The sets are amazing and the retro looks will definitely bring you back in time.

AX: Tricia Helfer plays William’s wife. Have you gotten to work together yet?

VAN HOLT: We have. We haven’t shot anything yet [as of the time this interview was conducted], but we’ve worked together at table reads. I already love her. She’s amazing. I can’t wait to share the screen with her.

AX: Do you get much variety in the locations? Because it sounds like the characters don’t get off the ship.

VAN HOLT: I do not. We don’t have a big variety of locations. The majority of what we’ve shot so far is on the bridge – ironically enough, because I was on a show called THE BRIDGE as well.

AX: What has your experience on THE BRIDGE been like?

AX: Has your Spanish improved while working on the show?

VAN HOLT: My character Ray-Ray makes interesting bilingual attempts. In real life, I speak a little Spanish. I do speak Spanish with [the Spanish-speaking cast and crew on THE BRIDGE] when I can. I have to work on French now. We shoot ASCENSION in Montreal, so I want to take this opportunity to try and learn how to speak French.

VAN HOLT: I’m hoping to do a film with my friend after we wrap ASCENSION, but right now, I’m focused on this show – it’s a very ambitious show to do and I’m completely focused and centered on that. We have a great cast and great directors [Mairzee Almas, Nick Copus, Robert Lieberman], a great show runner, a great d.p. The show looks amazing. I’ve seen some stuff and it’s beautiful. So I’m excited.