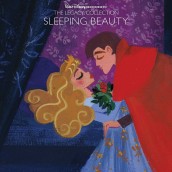 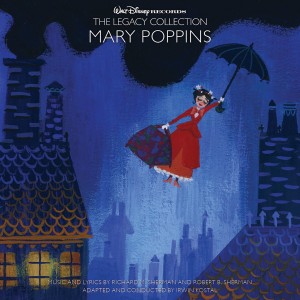 For a company that’s re-released their soundtracks as many times as there have been DVD editions of THE EVIL DEAD, Disney might have finally reached the alpha and omega of truly special special editions with their new spectacularly presented Legacy Collections. Begun with Hans Zimmer’s Oscar-winning LION KING, these gatefold CDs have used beautiful original art, copious liner notes and a kitchen sink of complete scores and outtakes to chronicle the creation of Disney music that remains undying for good reason – a heritage that now wonderfully continues with series producer Randy Thornton’s impossibly ambitious release of MARY POPPINS and a stay awake edition of SLEEPING BEAUTY,  improving on the sound of a score that stands as the first stereophonic soundtrack release ever back in the day.

MARY POPPINS flew away with five Oscars in 1965, among them statuettes for Original Song (“Chim Chim Cher-ee”) and its “substantially” Original Score, all channeling the wondrous energy of what’s arguably the most eternal tune-filled soundtrack created by The Sherman Brothers. Sure Richard M. and Robert B. had done some memorable Disney work before on the likes of THE PARENT TRAP and THE SWORD AND THE STONE, but their alternately jolly and melancholy numbers like “A Spoonful of Sugar,” “Feed the Birds” and “Let’s Go Fly A Kite” captured a real emotional resonance that went way beyond just having incredibly catchy hooks. It was music that heard beyond the dancing chimney sweeps and penguin waiters the subtly capture the emptiness of money-obsessed Edwardian England, and the desperate need of a family to make their father love them – all of course fixed in the end by the world’s best nanny. The first CD of the set offers the entire soundtrack as heard in the movie in a presentation that offers easily the best sonics that POPPINS has ever rung across the rooftops with. But the true treat of this collection lies on CD two, which reveals a cornucopia of unused material. With nearly every song (heard and unheard in the film) given a jaunty piano demo by the brothers, the perhaps they should have used ‘em highlights include the unpacking cheer of the “Mary Poppins Melody,” the Gilbert and Sullivan-esque militaristic pomposity of “Admiral Boom,” the cheerful wake-up of “The Right Side” (a song that could just as well be the template of every heroine song introduction for Disney hereafter), and the deliriously rhyming kazoo melody of “The Chimpanzoo” – though one might understand how the walrus-voiced “North Pole Polka” might not have been prime material. But the far more grown-up stand out is “The Eyes of Love,” a song that likely made Mary a bit too womanly for Walt’s tastes. The Shermans are at their most enchantingly trippy when venturing to “The Land of Sand,” whose exotic, dream-like melody and haunting, sphinx-like chorus make for a striking precursor to the outright native songs the duo would write for THE JUNGLE BOOK Beyond its original interview with the cast and look back with the Shermans on the creation of “Mary Poppins,” the third CD is mostly comprised of the speaking sessions between the brothers and Australian author P.L. Travers. While their collaboration was depicted as combative in the wonderful making-of MARY movie SAVING MR. BANKS, what’s heard here between the English-accented old woman and the peppy Shermans comes across as being an way-more pleasant experience for all concerned, not to mention an interesting peek into the real creative process that made “Mary” so cheerfully indelible for generations to come, fans who will delight in her new CD triple-play.

Many spoonfuls of Tchaikovsky sugar grace 1959s SLEEPING BEAUTY, which uses that Russian composer’s “Sleeping Beauty Waltz” to base its music on. There’s a thoroughly pleasant grace and beauty to George Bruns’ Oscar-nominated “adaptation” of the piece, as well as thoroughly original, and exciting prince-to-the-rescue music that makes for the climactic battle between the now-misunderstood Maleficent. But for the most part, SLEEPING BEAUTY is bird-chirping, sashaying strings that embody the Disney Princess at her most iconically pure-hearted, making for the most ingenious use of classical music the studio employed next to FANTASIA. The lyrics by Tom Adair, Sammy Fain and Jack Lawrence are the definition of now un-p.c. desire for a woman to find her place in the arms (and singing duet) of a prince wit the lilting “I Wonder,” while the thematic tune “Once Upon A Dream” is likely the most gorgeous example of lyrics being put to any famed concert hall piece, with a waltzing enchantment that likely would have made Tchaikovsky smile. Though SLEEPING BEAUTY offered far more score than songs, the second CD gives us the chance to hear the likely sillier musical that could have been, from the dueling kingly dads kvelling out their kids accomplishments in “It Happens I Have A Picture” and the pre-Supercalifragilisticexpialidocious wordplay of the fairy godmothers in “Riddle, Diddle, One, Two, Three.” And if the devilishly delightful numbers in A NIGHTMARE BEFORE CHRISTMAS  could be traced back in spirit, then they’d find a hilarious Halloween town in “Evil – Evil,” a spell-reciting duet between a goofily-voiced demons as they relish the chance to make the world a miserable place, complete to the accompaniment of nursery bells. It’s a song so wonderfully outside of SLEEPING BEAUTY‘s orbit that one can only imagine its fiendishly delightful spirit somehow entered Danny Elfman’s consciousness – and a reason for those who might be put off by SNOW WHITE‘s overwhelming niceness to grab this album.

Click on the link to Purchase the MARY POPPINS soundtrack

Click on the link to Purchase the SLEEPING BEAUTY soundtrack