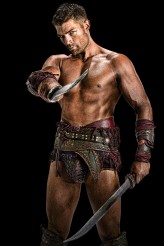 SPARTACUS: VENGEANCE first episode “Fugitivus” picks up pretty much just after we left off in the first series BLOOD AND SAND. Spartacus (Liam McIntyre) having escaped the House of Batiatus with his fellow gladiators and slave in tow, has fled beneath the streets of Capua plotting their next moves against the Roman Empire. Gaius Claudius Glaber (Craig Parker) is dispatched from Rome to take the situation in hand and kill Spartacus and his men, bringing with him his lovely and somewhat evil wife Illithyia (Viva Bianca) back to the place where she almost lost her life. In the wreckage of the House of Batiatus Glaber and company stumble across Lucretia (Lucy Lawless) who is seemingly a mad shell of herself, since she is the lone survivor of Spartacus’ break for freedom.

First off let’s address the new Spartacus played by Liam McIntyre. There is always hesitation in a viewing audience when a beloved actor is replaced for whatever reason, but in this case the late Andy Whitfield gave his blessing to be replaced as he was battling lymphoma (sadly a battle he lost last year).

McIntyre not only looks a lot like Whitfield, he also seems to embody the character of Spartacus as much as Whitfield did in the first season. The resulting transition is seamless, and you honestly forget most of the time that you are watching a different man inhabit the role. His take on Spartacus is a bit softer and somewhat less tormented than the character was in the first season, but it works for the situations that Spartacus finds himself in. His intensity is saved for moments of combat or revenge and we get to see a softer side again in love scenes and intimate moments with friends.

This is kind of a jumping in point for new viewers. You get a bit of a lead in before the credits for the “Previously on SPARTACUS” and that’s really all you need to know on the surface. The in-depth relationships of the characters aren’t obviously addressed in the quick re-cap, but you can pick things up as you go along if you are a new viewer. Having said that, if you haven’t seen the first two series of SPARTACUS – do so now! The electricity of the first season, and then the amazing journey and brutality of the prequel series are things not to be missed, and will only enhance your experience as you move forward and characters are re-introduced like Gannicus (Dustin Clare) who will end up being a major part of Spartacus’ army.

The start of this new season isn’t quite as engaging as GODS OF THE ARENA was. Since it is a continuation of the first season, the momentum that starts is a follow through of the last episode of season one. There isn’t quite as much drama in this new series just yet, other than the deaths of some supporting characters, but I’m sure this is a slower boil than previous series. Eventually this will end up with Spartacus leading an army against Rome itself and it’s going to take some time to get there.

It’s nice to see all of the actors back on the series. Old faces that we now know a lot more about thanks to GODS OF THE ARENA take on new levels of meaning to their actions. Of course, seeing Lucy Lawless as a hot mess is a nice shock considering how high and mighty Lucretia had become in the previous two series, and it will be even more entertaining watching her climb again to an even loftier perch as a woman spared by the Gods themselves.