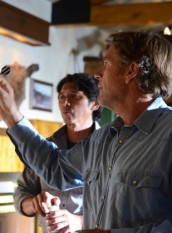 (c) 2012 A&E
Walt Longmire (Robert Taylor) has a lot on his mind. He stops in at the Red Pony to throw some darts and get advice from his close friend, Henry Standing Bear (Lou Diamond Phillips).
Reviews

Wowee! Now that’s the way a season finale should be done! LONGMIRE rounds out its tenth episode and season finale with a deeply satisfying episode on so many levels, and teases a LOT more to come for the second season. “Unfinished Business” is again a bit of an adaptation of “The Cold Dish” the first novel in the LONGMIRE mysteries series by Craig Johnson, and it’s kind of ironic that this season started with a bit from that novel and also ended with a bit from that novel.

I really enjoyed a lot of what the actors were given to deal with in this episode. The first scene that stands out in my mind is the confrontation between Walt (Robert Taylor) and his daughter Cady (Cassidy Freeman) about the actual cause of death of Walt’s wife and Cady’s mother. This is a bit of a departure from the books, but it also makes sense even with the books, in that Walt tells folks that his wife died of cancer per her last wishes. The emotions that ratchet up in seconds in this scene are amazing and both actors are so raw it hurts. I understand both sides of the emotional coin, and as Cady drives off into the night, I honestly can’t say if there is a wrong or right side to this situation. Every scene with Taylor and Freeman has been and is so believable as father and daughter that you completely forget they aren’t really related!

Since this episode deals once again with touchy Native American and white folks relations, Henry Standing Bear (Lou Diamond Phillips) gets drug into the middle of everything. When the Native kid is hauled in and is sitting in the jail, I literally kept saying out loud, “Where’s Henry? This kid needs him!” Then as if by magic Henry shows up and takes control of the situation. Not a lot of scenes with Henry in this episode, but every moment he’s on camera is an important one.

Branch (Bailey Chase) looks to be getting ready to make a deal with the devil at the end of this episode, and it certainly looks like Walt has the election in the bag after solving this pretty twisty case. I love the fact that while Branch has a seat to chat with Jacob Nighthorse (A Martinez), the Dog Soldier headdress is sitting out in the open, proudly displayed for anyone to see. I hope that level of arrogance is Nighthorse’s downfall in future episodes.

Vic (Katee Sackhoff) is dealing with a lot in this episode as well. She’s starting to really come to terms with the fact that she cares for Walt in more than just a professional manner. Her deciding to hide and then take Walt’s gift from another woman out her desk is an interesting scene to watch. Her interaction with Omar (Louis Herthum) is as always a delight, but it’s Sackhoff’s performance of a tough, no nonsense woman, dealing with deep hidden feelings that make Vic such a compelling character to watch. Plus I love the fact that most of her moments in the office aren’t really private, but are actually being watched by The Ferg (Adam Bartley).

We finally get a bit more on Denver and what may or may not have happened with the arrival of a detective from Denver (Charles S. Dutton). He also brings up a good point that I’ve seen on the posting boards…where are all the black people in Wyoming? The answer being that there really is only a teeny, tiny population of minorities in Wyoming, and this show portrays it faithfully by pretty much having Native Americans, and white folks living in the town. With Walt’s last sentence we end the season with more questions to ask about this situation form the past, but what will those answers be?

That’s it for now folks. Lots of things tied up for the season, and plenty more teased for next time! Boy Howdy! Keep that Rainier on ice and watch for this first season on Blu-Ray and DVD….and in the meantime pick up and read the original books, you’ll be glad you did!