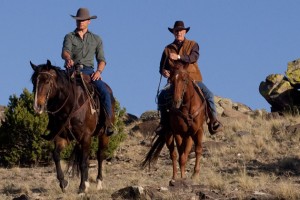 LONGMIRE is A&E’s new contemporary Western procedural based on the mystery novels by Craig Johnson, airing Sundays at 10 PM. In it, we see that Absaroka County, Wyoming, has a lot of crime for such a sparsely populated expanse. Robert Taylor’s character Sheriff Walt Longmire is in charge of maintaining local law and order with the help of his deputies.

Bailey Chase plays Deputy Branch Connally, who hankers after both the boss’ job and the boss’ daughter Cady (Cassidy Freeman). Chase, born in Chicago and educated at Duke University in North Carolina – he attended on a full athletic scholarship and graduated with a degree in psychology – has played a number of characters involved with the law, including his series regular role as police detective Butch Ada on SAVING GRACE, military specialist Graham Miller on BUFFY THE VAMPIRE SLAYER, a U.S. Navy petty officer on JAG and a U.S. border guard in the feature film CROSSING OVER. Chase has also had major roles on last season’s DAMAGES and the soap AS THE WORLD TURNS, among many other credits.

Right now, Chase is all about playing a lawman of the wide open spaces. He makes time for a private interview after an A&E network LONGMIRE press session at the Television Critics Association press tour.

ASSIGNMENT X: Your character Branch Connally has been described as being “the antagonist,” but what else is he?

BAILEY CHASE: In one way, he appears to me as the antithesis to Walt. I actually felt Robert look at me when the word “metrosexual” came up [in the earlier Q&A panel]. Branch represents a newWyoming, Walt’s very much old Wyoming, so old school/new school kind of thing. We’re both good guys, but at the end of the day, we have a very different way about going at things. He obviously thinks his is the right way, I think mine’s the right way. I think it’s going to be fascinating over the course of the series to see how that conflict plays out.

AX: So Branch feels sort of like he’s pushing at this boulder uphill to get some progress?

CHASE: Yeah. I feel like Walt’s way is much more methodical, whereas I think that I’m smarter and a better cop. I have much respect for him, but at the end of the day, if I see a better way, then I’m going to do it my way. And it’s not that I’m trying to undercut him or create this subterfuge in any way, I’m just doing it my way.

AX: Even though LONGMIRE films a lot more on location in New Mexico in the great outdoors than most TV procedurals do, is the pace of making the show the normal pace of making a TV show?

CHASE: Yeah, definitely in terms of the hours that we shoot every day, the production schedule, all very similar. In terms of the great open space, to me, that’s just another character in this story that we’re telling. For example, [there is a] scene at the cabin and it was before crew call, and all of a sudden, this herd of elk just walked across the prairie, and the d.p. and a couple of camera guys jumped out of the truck and [filmed the herd] and they used it in the pilot. And then they go from panning across this herd of elk to Walt driving his Bronco, so there are nice surprises that way. And also, just the effect that it has on all the other actors when you’re in a space like that, it’s just like, “Wow, this is so vast.”

AX: For the law enforcement characters in the story, is one of the challenges in the wide open spaces that you have much less possibility of witnesses?

CHASE: Yeah, that’s another thing that plays out in the pilot, that original crime scene, I thought it was pretty hilarious to see how they go about gathering the evidence [using a hairdryer to defrost a field]. And also the conflict between the white community and the Native American community. There’s some animosity there between their law enforcement and ours.

AX: You were on AS THE WORLD TURNS from 2003-2004. A lot of actors say that acting on soaps is the hardest acting work there is.

CHASE: I feel like – for me and probably for most actors – it’s boot camp, at least in the beginning. It was a great training ground for me, I logged a lot of hours in front of the camera and at that point, I felt a real growth, like I got over myself a little bit, my vanity and things like that. It’s about just showing up and the work. I feel like at that point, by the time I was done with that, it was like, “Okay, I’m a professional actor, this is what I do” [laughs]. And I felt like I earned it at that point. It’s hard doing daytime because of the demands. And I think that’s why the finished product suffers a little bit, because there’s never any time.

AX: And you were also on BUFFY for a year. Did you know at the time you were doing that it was going to turn into such a colossal cult fixture?

CHASE: No. No, I had no idea. It was my first real job as an actor that was any form of consistency character. It went across two seasons with this whole Initiative thing. It was obviously a cult rom-com that turned into something even bigger. So yeah, I’ve been going to shows [conventions] and people remember me and have little trading cards.

AX: Obviously, you play other types of characters as well, but you’ve gone from playing a soldier to law enforcement to more law enforcement. Has anybody like a casting director said to you, “You look like somebody who’d be in charge of people”?

CHASE: [laughs] No, nobody’s actually ever said that. I think it’s just about finding good material. SAVING GRACE was obviously great material, this [LONGMIRE] is great material, BUFFY was an amazing show. I mean, it was so far out there, and yet so well done at the same time. So that’s all I look for – a little arc on UGLY BETTY, which was hilarious. I mean, it just is about the material.

AX: Have you done any research for any of these roles?

CHASE: Yes. I’ve read the first book, which is what the pilot is loosely based upon, and then in terms of professional training, I’ve played the cop stuff in the past and done a lot of that, and I do know a little bit about the distinction between police departments and sheriffs and the legalities there. It’s similar to [the distinctions between] Army, Navy, Marines. They’re all very prideful, and at the end of the day, we’re all fighting for the same greater good, but when the firemen and the police department work together, they want to beat each other up [laughs]. It’s that kind of thing. There’s a difference in jurisdiction, is ultimately what it comes down to. And there’s no police department inAbsarokaCounty, so it’s just us with about five [deputies].

AX: How are you finding it playing off your fellow LONGMIRE actors?

CHASE: Lou Diamond Phillips is hilarious – I generally listen when Lou is in the room. Robert and I have a really nice kind of a competitive thing happening, yet at the end of the day, there’s a mutual respect there, I think, on both sides. And then with Katee, we also kind of agree to disagree on everything, but at the end of the day, there’s a little bit of a charge there between us, a certain – maybe we wouldn’t care to admit, but it might develop into something.

AX: How is it off-screen?

CHASE: This is just a little Buddhist bracelet that my girlfriend gave me. It says “the truth” in Sanskrit.