Lucain, Murder, and Bears, Oh My! 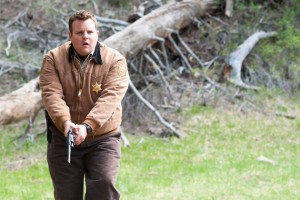 LONGMIRE is almost like SIX FEET UNDER, at the start of every episode I wait to see either how the victim is going to die, or what condition the body is in when it’s found. It’d be kind of funny just once to have a wood burned sign with the person’s name and birth and death dates pop up on the screen after the corpse is uncovered.

“The Worst Kind of Hunter” has one of the most gruesome deaths on the series so far, and I can think of a lot better ways to go than being mauled to death by a bear. That being said, the FX team that creates the corpses for this show is top notch, and the chewed up body of the ex-con was particularly delightfully graphic (but it was also tastefully shot so as not to completely gross out the viewing audience).

The new episode is directed by Peter Weller (ROBOCOP) and Weller also brings one of my favorite characters from the books to life in this episode, Lucian Connolly, the cantankerous former sheriff of  Absaroka County. Weller is PERFECT in this role, and is pretty much what I would expect Lucian to look like in real life. There wasn’t any mention of his having a wooden leg, and there wasn’t any attention drawn to it, but it doesn’t mean he doesn’t have one. I’m sure he will be back; he’s such a popular character that I can’t imagine the series without him.

Plus how is it that I missed the familial name connection between Lucian and Branch (Bailey Chase) until this episode? Damn. I’m getting rusty in my abilities to see things coming from time to time I guess. I like the fact that Lucian is Branch’s uncle. It makes it easier to see just how smarmy Branch is compared to the other member of his family that had a long career in law enforcement.

Nice to see Omar (Louis Herthum) back for an episode. I’m one of those people that always enjoy seeing characters from the books come in and out of a series. Omar is one of those that isn’t in the books a lot, but when he’s there, he’s important. I wonder if we’ll ever get to see his gigantic house, and his crazy wife who shoots at him from time to time? His interplay with Vic (Katee Sackhoff) was well done this episode, and it showed a bit more Vic’s lovely sarcastic side that I can’t get enough of.

Again bits and pieces of this mysterious thing that Walt took had a part in Denver. Getting closer and closer to whatever this may be, and his conversation with Lucian also hinted at the past trouble he’s been involved in. WHAT IS IT?!

The bear was a really unique choice of a murder weapon, and she was beautiful. I loved pretty much any scene with her lumbering around. Also, once again this series looks so perfect in terms of scenery and setting. I can’t even tell you how right it looks. Good job on the location scouting guys!