Attempted murder in the world of rodeo and bronc ridin' 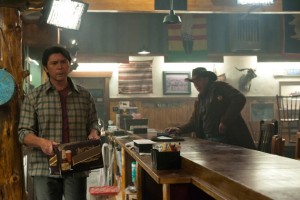 “8 Seconds” is an interesting and very twisty turvy episode of LONGMIRE. This series never ceases to impress with the levels of intrigue for each week’s mystery, and even though I figured this one out – it was only a couple of minutes ahead of the big reveal.

So many elements of this show are just slices of home. I’ve talked about this before, and this episode was no different. The fairgrounds that were used for the rodeo sections of the episode looked almost exactly like the fairgrounds back home in Sheridan, WY. Of course, the mention of Ranchester was a nice nod to the local area as well; as I had many Sunday dinners at the Ranch House Restaurant in Ranchester when I was a kid.

I honestly think the victim in this episode is savaged in a way that most of the vics in the previous stories hadn’t been. This attack is more personal and more vicious than even the bear attack of last week’s episode. The motivation for the attack was really not a surprise to me, and who was sleeping with who was something I got worked out a bit ahead of time.

Without giving anything away, the particular situation that is depicted in this episode happens a lot more than most people would think, and probably even more than I knew about when I lived in Wyoming. But, suffice to say that I knew my fair share of people in the exact same situation, and it was all very civil and a lot of times with everyone’s consent and understanding of the duality of their lives.

I like the line about Vic’s (Katee Sackhoff) hair color. In the books Vic is a dark haired beauty, and of course on the series she’s a blonde, so this is a nice way to throw a bone to anyone who might have an issue with her hair color. Plus, it was interesting to finally see Vic’s husband and get an up close and personal look at how much of a tool he is. No wonder they’re having problems; he treats her like property. Kick his ass Vic!

Finally in this episode we get to see a less douchey side of Branch (Bailey Chase). I was probably as surprised as anyone to see that he actually cares about Cady (Cassidy Freeman) and is willing to drop out of the Sheriff’s race to be with her. This is an astonishing thing and makes me reevaluate him just a bit. By that same token, it’s clear where all of his less desirable qualities come from…his dear old dad played by Gerald McRaney. He’s going to be someone I will love to hate. Nice job on casting as well since he is supposed to be Peter Weller’s brother from last week’s episode. The two actually look somewhat similar and could pass as family. The show would have to be SIMON & ROBOCOP now I guess.