A fitting and satisfying farewell to an endearing series 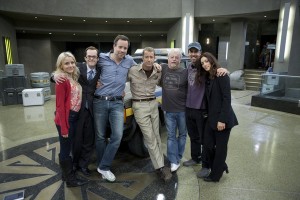 “Just Another Day” wraps EUREKA up in true EUREKA style. Some TV series employ a scorched-earth policy when they finish. In some cases (as with serialized shows), they’ve earned it; at other times, the finales seem designed to take the viewers’ toys away, so that they cannot canonically imagine future adventures for characters they have come to love.

EUREKA co-creator and show runner Jaime Paglia turns out to be very happy to leave us with our toys. There are a few big events, including two that have the potential to destroy the town of Eureka, but as the episode title observes, around here, that’s just another day.

Since the Department of Defense has defunded Eureka, people are leaving and the movers are removing computers, furniture and the like of out Global Dynamics. Fargo (Neil Grayston) stages a protest sit-in in the GD rotunda.Fargohas devised a small device that prevents anyone from picking him up and moving him. A sudden wormhole sends Jack’s (Colin Ferguson) jeep straight from the road into GD, almost causing Jack to run overFargo. When wormholes begin popping up all over, becoming more dangerous as they do – poor android Andy (Kavan Smith) is cut into small pieces (though they fortunately can be reattached) – the usual gang bands together to solve the problem. However, it turns out that a living person must enter the combined wormholes to deliver the device that will shut it down. Jack feels this task is his responsibility, despite the protests of wife Allison (Salli Richardson-Whitfield).

Since this is the very last episode, the decision has real suspense – not about whether Jack will do it or not, but about what the outcome will be. Will the makers or EUREKA suppose that the only way fans will remember the show is if it ends in tragedy, or will they trust that EUREKA lovers will cherish the show’s sense of fun and friendship no matter what? The latter wins out. After a tender exchange with Allison, Jack jumps into the combined wormholes and is launched skyward, seeing his life flash before his eyes – or, more accurately, seeing quick clips of key moments from past EUREKA episodes flash before his eyes. Jack falls to the ground, winded but mostly unhurt, having saved EUREKA for about the zillionth time.

Meanwhile,Fargo has saved the town in another way. Partway through the episode, he makes a mysterious phone call. Later, the Secretary of Defense calls Fargo to say that Eureka has been sold. The buyer turns out to be none other than time-traveler Trevor Grant (James Callis), who now calls himself Trent Rockwell. He’s rich enough now and indebted enough to Eureka and its inhabitants to keep everything going.

In other news, Jo (Erica Cerra) finally gets down on one knee and proposes to Zane. Holly (Felicia Day) remembers enough of her time with Fargo to want to restart their relationship. She gets a job with DARPA and invites Fargo to be part of her team; he accepts. Henry, desperate to save the incarcerated Grace (Tembi Locke), sets up a meeting with Beverly Barlow (Debrah Farentino). Beverly won’t come clean with the DoD as Henry wants her to, but she does provide the location of the missing and guilty Senator Wen in exchange for Grace’s release. (As Wen has been trapped in a virtual matrix for one, she’ll probably be glad to be in a regular jail.) Allison reveals to Jack that she is pregnant with their first child together (her third, his second total) and Jack is overjoyed.

As Fargo is going to leave with Holly, he appoints Henry the new head of GD. One could quibble with this decision –Fargo remembers the timeline where Allison was head of GD, so shouldn’t she get her old job back now that it’s available again? – but it’s not a major issue.

Actually, Jack should probably look into this sooner, given that something very similar and dangerous happened pretty recently, but he’s right in believing it’s a normal enough event in these parts. We also get to see some other old friends, with Christopher Gauthier’s Vincent getting some good moments and Wil Wheaton, Matt Frewer and Christopher Jacot all along for this adventure. It’s especially good to see Callis back as the ‘40s smoothie, especially as his return here is the ultimate payoff for him pushing his way into the present, proving at last that his presence worked out for the best in the end. It also seems right to have Farentino’s Beverly put in an appearance, as she was there at the start, and gets to marginally redeem herself.

There doesn’t seem to have been any way to bring back Ed Quinn’s Nathan Stark, but at least he’s there in the flashbacks (as are the Claymation characters and guest Stan Lee).

The thing that’s striking about “Just Another Day” is that it deliberately is not striking – it really resembles other episodes of EUREKA where things may be irrevocably altered, but still work out right (instead of episodes that end on cliffhangers). No doubt the town will continue to be endangered on a regular basis and no doubt Sheriff Jack Carter will be there to save all of those days.

This is not a smashing climax, but more a case where the end simply reminds us what a great, fun, friendly journey EUREKA has been – and a finale that leaves the door open for anyone who wishes to imagine what may happen in that peculiar little town next.

Related: Exclusive Photos from an Evening With Syfy’s Eureka