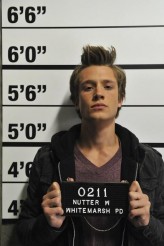 The actor discusses playing with style and high school 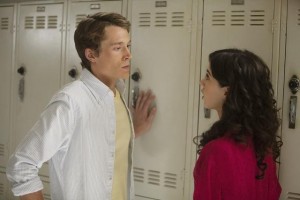 ABC Family Channel has scored a hit with its new series JANE BY DESIGN, which airs Tuesdays at 9 PM. Erica Dasher plays Jane, a high-school student who is mistaken for a twentysomething and winds up working at a fashion magazine for a demanding boss, played by Andie MacDowell.

Nick Roux plays Jane’s best friend and fellow high school student Billy Nutter, the first to learn of Jane’s double life. California native Roux has appeared on ABC Family and its sibling Disney Channel before – he’s previously guested on THE WIZARDS OF WAVERLY PLACE and THE SUITE LIFE ON DECK – but JANE BY DESIGN is his first stint as a series regular.

At a party thrown by ABC, Roux displays his own sense of style, complete with unconventional haircut, as he talks about Billy and JANE.

ASSIGNMENT X: What is Billy like as a character?

NICK ROUX: He’s kind of the edgy punker of the show, with a big heart. I know about Jane [having a double life] and I help her balance it out and run back and forth.

ROUX: A little bit of both, but mostly of the school part.

AX: Did you have this hairstyle before you got the role?

AX: Do you sing “My Way” like Sid Vicious did, and then Gary Oldman did when playing him in SID AND NANCY?

ROUX: Gary Oldman’s the man. But no, I don’t sing.

AX: Is there anything different about working on ABC Family than working on a less youth-oriented network?

ROUX: I’ve only worked with both Disney and ABC Family. They’re both similar and they take really good care of the actors. They’re great at promoting things, so I love working with ABC Family. I definitely love my job.

AX: Were you at all interested in the design world before you got this job?

ROUX: Yeah. I’ve always had my own unique sense of fashion, so getting to bring some of my personal style to the show was a plus, because I got to pick out what I wanted to wear and kind of build my character from the ground up. That was definitely a plus of the show, being able to do some stuff in the fashion world as well. I just like to stand out and be different, and fashion is a real big statement. How you dress is, a lot of times, how people see you. A lot of people judge a book by its cover, so I like to be a crazy cover. But I don’t know. It’s just fun to express yourself through clothes and any way you can – acting, singing, whatever you do that you love. A way to express yourself is fun for me. So my style is always changing. I like to keep people guessing.

AX: Having finished high school yourself, how is it returning there in order to play Billy?

ROUX: It’s definitely pretty fun. I draw a lot from my own personal experiences in high school, so I’ve been there. Playing certain characters, you haven’t been in that situation, but a lot of the situations that I get into [as Billy], I’ve dealt with in high school.

AX: The show’s creator April Blair says that Jane and Billy are meant to be together, though there are obviously a lot of obstacles, including other guys in Jane’s life. What do you think?

ROUX: This is what I say – Jane and Billy love each other. So you never know what that love is going to turn into

ROUX: Yeah. I’m a part of LEMONADE MOUTH, a Disney movie, and we’re doing a second one pretty soon, so that’s all getting worked out. We’re trying to get the whole cast back together so we can shoot for a couple months, but that’s about it, just with Disney/ABC Family.

AX: Anything else you’d like to say about JANE BY DESIGN?

ROUX: Just that Erica Dasher and Andie MacDowell are amazing. They’re so talented and the show’s really funny and dramatic. It brings everything and all the cast – the diversity really comes together in a great way. I hope it’s fun to watch, because it was fun to do.