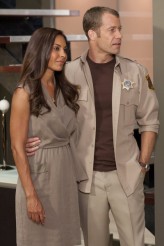 An episode with more plot than humor, resulting in a sense of imbalance

When Allison’s (Salli Richardson-Whitfield) scientist older brother Marcus (Dondre Whitfield, Richardson-Whitfield’s real-life spouse) comes for a visit to meet Allison’s new husband Carter (Colin Ferguson), there is some apprehension. Carter tries to shrug it off, but Allison’s son Kevin (Trevor Jackson) worries that Marcus is prejudiced against “dumb people.” First, Kevin pretends he needs help with a presentation in order to coach Carter on a scientific method – and then Kevin slips Carter a drug to enhance his brain capability. It works a little better than expected, causing Carter to surpass Marcus’ intellect and scientific invention skills.

Unfortunately, this causes Carter to become callous and rude. He destroys Marcus’ car engine to prove a point. Then, needing a better computer, Carter gives Deputy Andy (Kavan Smith) an upgrade that makes Andy “smarter,” but so power-hungry – that is, in need of electrical energy – that Andy starts stealing it from every source available. Andy almost “kills” S.A.R.A.H. for her power source before she shuts him down. Although Carter likes his newfound genius – for one thing, he feels he at last “fits in” with the rest of the people in Eureka– Allison restores him to normal. Andy is restored to normal as well.

Meanwhile, holographic Holly (Felicia Day) desperately wants a real body. Fargo (Neil Grayston) is initially against Henry (Joe Morton) and Zane’s (Niall Matter) attempts to provide her with one, as failure could obliterate Holly altogether. However, Fargo ultimately sees the folly of his overprotective ways and agrees to help Holly find some freedom from her computer confinement.

While it’s fun to see Ferguson get to rattle off theorems and jargon at top speed, and he’s good with the cold-assed snark, there’s something that doesn’t compute in why Carter should suddenly turn into a raging egomaniac who is competitive, petty and no longer recognizes Andy as a sentient being, let alone his friend. The script goes overboard in reassuring Carter that he was just fine in his original condition. Carter is in fact a perfectly good guy and functioned better as his original self, but surely there are better ways of expressing this than suggesting – as the dialogue appears to do – that there’s a required tradeoff between intellect and kindness. Most of the characters in EUREKA give the lie to this notion – Morton’s Henry is all heart and soul, as well as brain. “Smarter Carter” is right that not everyone needs to be brilliant, but it holds up the virtues of the “common man” so vehemently that it almost seems to be making a case against the basis of the series.

This wouldn’t be quite so noticeable if the whole episode didn’t consist of Allison conflicting with Carter, Holly conflicting with Fargo and Andy becoming a general menace. There isn’t a plot thread where comradeship or humor make many inroads this time around, and the overall result is something that feels a little outside the city limits of EUREKA.