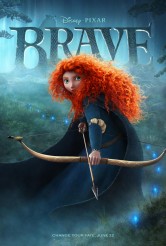 An engaging Disney/Pixar release that feels like an adaptation of a myth, though the story is original

BRAVE, the latest release from Disney/Pixar, has a lot going for it. For starters, the screenplay by Mark Andrews, Steve Purcell and Brenda Chapman & Irene Mecchi, from Chapman’s story, has the feel of true mythology to it, even though it is original. Second, the 3D animation of humans gets around the issue of “dead eyes” that so often plagues this form. Thirdly, if there were an Oscar for Best Performance by a CGI Bear, this movie would win it paws-down. Finally, to answer the question begged by the advertising, yes, this is a feminist/humanist film, with a young heroine who is fighting for her family – and for her own right to self-determination.

Not that BRAVE goes in for such high-flying language or that Scottish Princess Merida (voiced by Kelly Macdonald) is thinking in such terms. Instead,Merida, coddled by her adoring father King Fergus (voiced by Billy Connolly), and tutored by her rule-abiding mother Queen Elinor (voiced by Emma Thompson), simply wants to go on as she has.Merida enjoys riding her huge Clydesdale, practicing archery, climbing and exploring. WhenMerida is informed that she’s supposed to marry the winner of a tournament for her hand, she is apoplectic.Merida’s efforts to get out of this traditional obligation lead to magic, havoc, danger and at last some empathy.

BRAVE is a bit more streamlined in its storytelling than other Pixar films. There are no subplots and no hint of ensemble – the main characters are very much Merida and Elinor, and we’re with them (mostly Merida) almost entirely throughout. The movie has a unique take on parent/child conflict that is conceptually hilarious – in practice, it is still humorous, but winds up being more affecting than mirthful. The writers do an extraordinarily good job of both explaining why young women might well be appalled at the notion of marrying a stranger and why noble parents might feel this is necessary for the common good. There aren’t many other family films that so clearly articulate notions like geopolitical alliances in ways that even little ones will understand without annoying the grown-ups in the audience.

There is a becoming sense of folklore to BRAVE, with spells that go awry, transformation and a royal scion on a quest, not to mention ye olde archery tournament, which has a consequence here that probably hasn’t been dramatized before. Like most Pixar films, BRAVE has a good deal of humor, both verbal and visual, but its real strength is in what might best be termed its consistency. The story, the music, the scenery and even the accents (most of the key voice cast are real Scots) all pull together to create a slightly dreamlike, mightily woven-together whole, where all the elements fit one another. The greens and browns of the landscape, the dappled gray of stone castles and stone circles and the texture of animal fur all provide an understated visual grounding for BRAVE, so that when magic does enter the picture, it feels like we’ve been slowly primed for a development that fits within the framework.

Merida’s cloud of red hair almost functions as its own character. We know she has to be a rebel because the hair announces this before Merida speaks a word. The hair is huge, in almost perpetual motion, and is a fiery visual focal point that continually stands out against the soft natural colors of the production design.

It’s great that BRAVE has a lot of Scottish actors playing its Scottish characters. Macdonald is an ardent heroine and Thompson (English but employing a Scottish accent that sounds spot-on to these American ears) makes the ever-proper Elinor sympathetic in her demands (credit also the writers and animators). Connolly is wonderfully warm as the king, and Robbie Coltrane, Craig Ferguson and Kevin McKidd add perfect support as a trio of clan chieftains.

BRAVE is a bit quieter than the usual Pixar fare. There is a sense at times that it’s trying too hard to make sure we notice that Merida is female, so that her issues, magic and bear-filled as they are, take up the whole of the story. It’s hard to imagine the same sort of treatment of a male protagonist – for example, HOW TO TRAIN YOUR DRAGON (not Pixar) had a similar parent/child issue between son and father and still found room for dragon-training. BRAVE is so consistently entertaining and wonderfully atmospheric that most viewers may not notice this, or object if they do.

In summation, BRAVE is a physically gorgeous work that succeeds in transporting us to another world and immersing us there, where we find touching and even memorable characters.

Related: Exclusive Photos from the BRAVE world premiere and grand opening of the Dolby Theatre