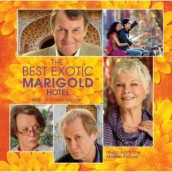 From the dangerous Chinese chase of RED CORNER to the bizarre Arabic rhythms of JARHEAD and the indigenous Australian music of OSCAR AND LUCINDA, Thomas Newman is one of film scoring’s most ethnically idiosyncratic world travelers, a musician to whom rhythm is his eccentric lifeblood. So what better place for a stay then in a land associated with the birth of plucked harmony itself?

Newman’s right at joyous home with a first class room in THE BEST EXOTIC MARIGOLD HOTEL, a movie that’s about how the country’s vibrantly tuneful culture brings new life to a bunch of British fogies. The score is a virtual bazaar of ethnic instruments, a mélange that includes the tabla, handclaps, sitar, violin and mandolin. But Newman’s unique touch has always been mixing the beats of east and west in electric and symphonic measure, a rocking approach that puts a new spring in these retirees’ steps, while also providing a restful air that’s as much about India’s mystical enchantment as its colorful hustle and bustle.

Perhaps the biggest treat in Newman’s positively youthful wallpapering is how MARIGOLD recalls such early alt. comedy scores of his as DESPERATELY SEEKING SUSAN and REAL GENIUS, as filtered through a matured, off-the-wall raga that’s now translated into the cartoon likes of FINDING NEMO and WALL-E. A delightfully intoxicating musical voyage that luxuriates in discovery and joy, one couldn’t ask for a better postcard from Thomas Newman’s ethnically eclectic sound than this HOTEL.