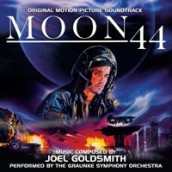 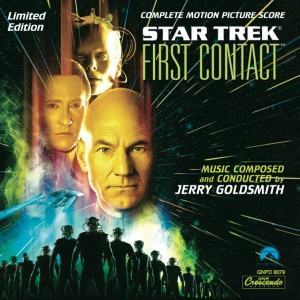 It’s not easy being in the shadow of a man who made history, whether in world events or the creative arts. It’s even bolder to follow in that father’s footsteps, knowing that it’s nearly impossible to scale the same heights, no matter how talented you might be. So props can certainly be giving to the recently departed Joel Goldsmith for choosing his father Jerry’s profession, especially the son didn’t achieve the kind of bigger budgeted projects his work warranted. Yet that never stopped Joel from particularly excelling in the genre with such scores as THE MAN WITH TWO BRAINS, WATCHERS, KULL THE CONQUERER, MAN’S BEST FRIEND and the numerous episodes of STARGATE that would finally bring him Emmy recognition.

It would ne that series’ co-creator Roland Emmerich who gave Goldsmith one of his biggest scores, as well as his first official CD release when they partnered on 1990’s MOON 44. Now Buysoundtrax scrubs up the sound of that original Silva Screen CD, giving even more impressive power to Goldsmith’s full-throttle sci-fi action score.

MOON 44 was all about using technical cleverness to give real dimension to this relatively low-budget movie that pitted lunar flyboys and their nerd technicians against their evil corporate masters. In that respect, Joel Goldsmith’s work is a great example of musical smoke and mirrors. Though the performance and recording of the Graunke Symphony Orchestra might be shaky, Goldsmith wings it with the sheer scope of his music, his driving brass and dynamic orchestrations recalling his dad’s talent for military showmanship and rhythmic percussion, with the action even hinting at the dance-like movements of “The Wind and the Lion.” But though the champion gene is definitely on display in Goldsmith’s work, his own, heroically thematic voice is more than impressive on its own- big, brawny and brassy stuff that thrills with the passion of a young composer finally getting to create an epic on a relative shoestring- something that soon wouldn’t be a problem for Emmerich.

Not only would MOON 44 be ironically re-issued just before Goldsmith’s passing, but a complete edition of STAR TREK: FIRST CONTACT. With Jerry’s multiple projects at the time making him unable to solely finish the score, Joel was given the opportunity to step in and write numerous, important cues that would necessarily be in his father’s “voice.” FIRST CONTACT was all the more prestigious for making the elder Goldsmith’s return to the franchise in the many years since his landmark score for STAR TREK: THE MOTION PICTURE.

It was an equally momentous occasion for Joel in terms of the musical scope and responsibility he was given. And the younger Goldsmith rose to the challenge, with the cold, industrial feel of MOON 44 certainly heard in his personification of The Borg. The climactic “Flight of the Phoenix” makes for CONTACT‘s most dazzling set piece as humanity’s noble warp breakthrough is contrasted with the suspense of a possessed Enterprise bent on destroying the much smaller ship (played complete with Alexander Courage theme), before conjuring Picard’s cliff (or pipe) hanging triumph against the Borg queen.

Rightfully regarded as one of the best TREK pictures and scores, this complete FIRST CONTACT showed a touching musical symbiosis between father and son, now both having ascended a stairway to heaven. Both lives may have been cut short, but their essence very much alive in their music, especially this month for Joel Goldsmith with MOON 44 and the complete FIRST CONTACT.