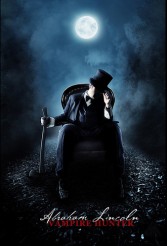 Normally, this reviewer is a believer in substance over style – what a movie is about, its story, its ideas, its emotional impact and its performances normally take precedence over what the film looks like. However, this is not true of ABRAHAM LINCOLN: VAMPIRE HUNTER. It’s probably possible, perhaps even easy, to find out what director Timur Bekmambetov and the other creative parties responsible were thinking when they decided to shoot this action/horror piece in high-definition video instead of film. Did they somehow not know what it would look like, or did they think it somehow enhanced their vision of the piece, or did it make some of the special effects easier to execute?

However it happened, the end result is one of the worst-looking major studio releases in recent years. The 3D adds depth of field to the scenery, but the actors’ faces, especially in closeup, do not have the dimensionality of the background. The combination of cinematography, lighting choices and the 3D glasses comes together to make skin tones of living characters appear gray, and some shots have the pixilation of news footage. In low-budget indie movies like THE BLAIR WITCH PROJECT and PARANORMAL ACTIVITY, where the footage is purportedly being shot by hand-held video cameras or security cams, this makes complete sense. In the context of ABRAHAM LINCOLN: VAMPIRE HUNTER, it’s a baffling choice.

To paraphrase an old dark-humored joke, other than that, Mrs. Lincoln, how did you like the movie?

We see Abraham as a young boy who is first appalled by the whipping of his same-age black friend Will Johnson (played as an adult by Anthony Mackie) by the malevolent Jack Barts (Marton Csokas), then horrified when Barts invades the Lincoln home, reveals himself as a vampire and drinks from Abe’s mother, causing the woman to rapidly sicken and die. Abe (played as an adult by Benjamin Walker) grows up desperate for vengeance upon Barts. Consequently, when Abe is approached by youthful-looking but experience vampire hunter Henry Sturges (Dominic Cooper), the young man is willing to make a deal – kill whichever vampires Henry designates in return for Henry’s help in tracking down Barts. However, Abe gets involved in local politics and with the fetching Mary Todd (Mary Elizabeth WInstead), which are distractions from his slaying duties, much to Henry’s consternation. Abe winds up in the White House, but given the vampires’ involvement in the Confederate cause and a particularly egregious act of vengeance by the bloodsuckers, the president sees his public and private causes converge.

There are some intriguing ideas here and it’s possible that they worked more harmoniously in Seth Grahame-Smith’s well-loved novel that is the basis of the film (Grahame-Smith adapted the screenplay himself). To his credit, Grahame-Smith doesn’t try to reinvent the wheel here. The writer doesn’t reference familiar characters like Van Helsing and Buffy, but he understands how to set up the film’s particular vampire mythology and he takes pains to address some questions that arise within it, such as why disagreements among vampires can be so complicated.

However, there’s a weird kind of over-reach here when trying to marry the horrors of slavery and the Civil War with the supernatural in quite this way. This sort of thing can work, of course – X-MEN: FIRST CLASS playfully inserted its superheroes into the Bay of Pigs incident. But ABRAHAM LINCOLN: VAMPIRE HUNTER seems like it is at once trying to be daring and play it safe. There’s a sort-of through-line between Abe’s objections to the institution of slavery and the depredations of vampires, but it doesn’t coalesce in a way that makes us feel anything. There’s also something a little condescending here (if, as the story has it, black people had the most to fear from vampires in this time and place, why do they need a random white guy to organize the rescue?). In places, the film is downright tone-deaf. Early on, a whip lashing out to scar a nine-year-old child is shown in 3D. At the risk of being downright pompous about film techniques, a 3D shot in which an element protrudes over the edge of the screen is customarily done with an edge of humor to the shock value. Either we’re being asked to laugh at a child being brutalized, or else this is one more instance of the filmmakers not realizing how something looks.

On the upside, the look of the vampires in their true form is scary and beastly, with a flickering effect that is enhanced by the video (perhaps this was the reason for use of the format). Leading man Walker is very likable, projecting a moral solidity and great warmth – he resembles a younger, smoother-faced Liam Neeson. Anthony Mackie is stalwart as Abe’s lifelong friend, Winstead is spunky as a very sane Mary and Csokas is appropriately loathsome as Barts. Rufus Sewell is smoothly evil as chief vampire Adam.

ABRAHAM LINCOLN: VAMPIRE HUNTER is not entirely without merit, but it comes with much mess.