Home » Exclusive Interview: Mary Lynn Rajskub on the end of 24 and HOW TO BE A GENTLEMAN 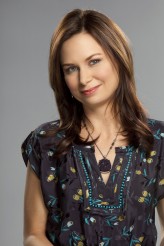 Exclusive Interview: Mary Lynn Rajskub on the end of 24 and HOW TO BE A GENTLEMAN

The actress also talks comedy and HOW TO BE A GENTLEMAN 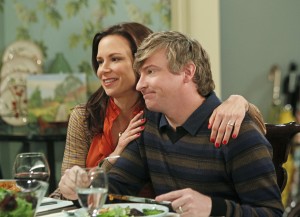 HOW TO BE A GENTLEMAN has not been one of CBS’ sitcom success stories. The half-hour comedy, starring David Hornsby as ultra-polite Andrew and Kevin Dillon as Andrew’s former high school tormentor-turned quasi-life coach, ends its nine-episode run this Saturday night.

However, Mary Lynn Rajskub, who plays Andrew’s ultra-assertive sister Janet, is unlikely to be slowed down by GENTLEMAN’s gentle exit. The actress can currently be seen on the big screen as an acerbic newspaper editor in SAFETY NOT GUARANTEED and stars in two Web series. One is DIRTY WORK, about a crime scene cleanup crew; the other is DICKI, which had its first season last year on My Damn Channel. Rajskub also appears regularly on Los Angeles stages doing comedy, both with other performers and in a one-woman show that she wrote, entitled MARY LYNN SPREADS HER LEGS.

It may come as news to some viewers that the Michigan-born Rajskub has done more comedy than drama, since she is best known for playing grumpy but super-capable computer genius Chloe O’Brian on Seasons Three through Eight of 24.

We caught up with Rajskub to ask her a few questions about her comedy work and the end of 24. And no, she doesn’t know any more about the 24 movie than you do right now – or if she does, she’s not saying.

ASSIGNMENT X: You had done comedy prior to 24 …

MARY LYNN RAJSKUB: Before 24, all I did was comedy. I actually have a fine arts background, so I started in performance art, and then people were laughing at me, and I [began working with] a bunch of comedians, and I spent my entire time before 24 doing comedy and I always did long-form shows that were personal.

AX: Your most recent stage show, MARY LYNN SPREADS HER LEGS, was largely about motherhood?

RAJSKUB: Yes. I think in the past when I was younger, the comedy was to deflect getting really personal. Over the years, I’ve been able to kind of crack the story and mature a little bit, too, and have more experience with motherhood and getting married, so yeah, that was the subject. When I first had my son, I didn’t really like him very much for the first three months [laughs].. I found it very hard and so I took notes. I remember waking up in the middle of the night, thinking, “I’m going to call the police on him.” Because he was just crying, and honest, I was thinking I wanted to call the police to help me, and then I caught myself having that thought and it just made me laugh, so I had a bunch of thoughts like that that I just sort of crammed into the show. 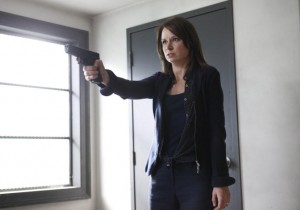 AX: So sleep deprivation is a big topic?

RAJSKUB: Well, sleeping is a huge part of it, but it’s such a huge upheaval and a big change for me. I was living as one of those women who, I waited a long time to have kids, it wasn’t really on the front of my plate. I have to say now I adore [motherhood]. It just takes some getting used to. Even if you want to be a mom, it will take everything that you are about. Everything that you’ve planned, you can’t plan anything. It just turns your whole life upside-down. I absolutely love it and I think all the clichés are true.

AX: How old will your son have to be before you let him read the script for the one-woman show?

RAJSKUB: We’ll see how mature he is. He might be eighteen or so.

RAJSKUB: Yeah. I did some guest roles on RAISING HOPE and MODERN FAMILY. And going on MODERN FAMILY, it had been a long time since I’d been on a sitcom, and I was sitting there, and I remember [MODERN FAMILY creator/exec producer] Steve Levitan, came up and he sat right next to me and he goes, “Can you believe you were on a drama for six years?” And I started laughing and I said, “I know! Isn’t that great?” [laughs] It’s this kind of cool thing that happened in my life. No complaints, it’s wonderful to be on such an amazing show [as 24] and to be known from that, but I just sort of look at it and go, ‘Wow.”

AX: Was doing those guest shots like good practice laps for getting into the swing of being a sitcom regular?

RAJSKUB: Yes and no. You can’t really practice for being in a room with your cast mates and working through a new script, but like we were talking about, I’d always been doing my stand-up and doing the one-woman shows and stuff like that, so …

AX: What’s your character Janet like on HOW TO BE A GENTLEMAN?

RAJSKUB: I am very overbearing and I would say the boss of my marriage, and I’m very much in love with my husband. We work at the Atomic Science Museum in Chicago, that’s how my husband and I met, and I also want my brother to grow up and I kind of [deal with him] in a harsh way sometimes, but I want him to be normal and I think he’s kind of a loser. I’m also put in my place by my mom.

AX: There are now a lot of tech-savvy female characters on TV, but when you started as Chloe on 24 back in 2003, she didn’t have a lot of company. Did you hear from a lot of girls and young women who saw Chloe as a role model?

RAJSKUB: I did, and I was really excited for her, because the part started out, as you know, every year, [Chloe] was the computer tech for that year. It turned into something where people said, “I know someone like that, but who works in my office, she’s so annoying,” or “I wish that I could be that blunt,” and how loyal she is and how smart she is. I think the whole climate of shows right now and the different aspects for women is fantastic, because it’s showing a lot of different angles and complexities [for female characters] across the board.

AX: To ask one more 24 question, when Kiefer Sutherland as Jack Bauer had that speech at the end of the series to Chloe about how, “When I started here, I never thought that you would be the one to have my back,” was that the show giving you a shout-out?

RAJSKUB: Absolutely. That whole last part of that show – it will make me emotional if I go into it even now, because, again, it was one of those moments where I’m like, “I’m saying goodbye to the show, in the show, for the show.” …

AX: Did you know about that scene beforehand?

RAJSKUB: I knew about it, but the way that they did it was, they filmed my first take, because we knew each other well enough, and they filmed my close-up on the first take, and it was on that huge screen that was in the CTU of Kiefer talking to me and I just completely lost it.

Related: Exclusive Interview with TOUCH star Kiefer Sutherland on his new series and the 24 movie

Article Source: Assignment X
Article: Exclusive Interview with Mary Lynn Rajskub on the end of 24 and HOW TO BE A GENTLEMAN