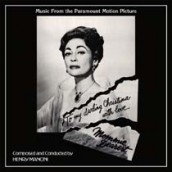 Henry Mancini scores the biggest Mother of them all

As a composer whose beautifully lush music is the equivalent of gauzy cinematography from Hollywood’s romantic era, few musicians were better suited than Henry Mancini to contrast the sound of the picture perfect studio system with the unwholesome activities of one of its biggest starlets. But then, perhaps the scream of “No more wire hangers- EVER!” sums up the disconnect between an 8 x 10 glossy of Joanne Crawford and the alleged dragon lady behind it, let alone the camp appeal that her biopic MOMMIE DEAREST has gotten since its 1981 release. But if there’s one person who helped bring this unjustly, and endearingly maligned film a straight face (let alone sympathy), then part of that credit would also fall to Mancini, whose impeccably coiffed, and subtly seething score is finally freed from Paramount’s closet by La La Land Records.

Though best known for his effervescent Blake Edwards’ scores like THE PINK PANTHER and BREAKFAST AT TIFFANY‘s, the prolific Mancini had equal aplomb for the far more serious material like THE DAYS OF WINE AND ROSES and THE MOLLY MAGUIRES. But whether he might have been dealing with alcoholism or miner’s rights, the composer’s great talent was not to turn melody into melodrama, an ability that was likely put to the supreme test on MOMMIE DEAREST.

In thematically personifying Crawford, Mancini comes up with one of his most beautifully heartbreaking themes, unmasking the emotion behind Crawford’s made-up façade and a desperate need to be loved that she could only act out with superficial charm and fearsome anger. For within his soothing arrangements for piano, flute and strings, Mancini lets us hear the anguish of a little girl lost, who only succeeds in royally screwing up her daughter. It’s music that’s as tender as it is tragic in its high living sort of way, a musical star filter suffused with sadness. And when it comes to Crawford / Dunaway’s memorable beat-downs, Mancini’s raging orchestra is a frightening thing to behold, conjuring shades of the space vampires he’d later score for LIFEFORCE. Except here the monster is the biggest mother of them all.

The gorgeous sound of the long-awaited MOMMIE DEAREST is as picture-perfect as any of Joanne Crawford’s publicity masquerades, offering the complete score and its alternates along with source cues. Mancini evokes Hollywood’s bygone era with a piano rendition of “Isn’t It Romantic?” big band jazz and Oscar fanfares, along with deceptively pleasant Christmas and calliope music. The result is anything but campy, with Jeff Bond’s appreciative liner notes bringing some respect to a MOMMIE that sorely needs it.

Click on Link: To Purchase the MOMMIE DEAREST soundtrack