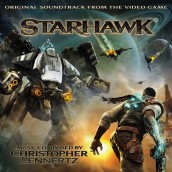 Christopher Lennertz has a sci-fi western blast for the PS3

Though Christopher Lennertz is prolifically onscreen with the comedy-centric likes of HORRIBLE BOSSES and HOP, it’s the videogame arena that truly lets this composer strut his creative stuff beyond giving humorous oomph to male bad behavior and talking animals. You can tell the first-person blast he has at the controls, often when bringing new energy to musical styles set long ago in the traditional movie realm, whether it’s the military action of MEDAL OF HONOR‘s European and Pacific assaults, the grooves of classic and current 007 music for FROM RUSSIA WITH LOVE and QUANTUM OF SOLACE, or being far more than a couch potato with THE SIMPSONS.

The most dynamic example Lennertz’s FPS inventiveness just might be the new kick he brings to the sci-fi western realm of Sony’s STARHAWK. Given a game that throws a kitchen sink of transforming robots, laser shooting and vehicle blasting amidst the do-it-yourself “Build & Battle” defenses of a planetary badland, Lennertz runs with the mix-and-match possibilities of combining symphonic adventure with the dust-weathered tropes of a horse opera. Hence fuzz guitars, fateful harmonicas, clopping bells and dusty fiddles rain from the sky (captured by such Spaghetti-playing greats as George Doering and Tommy Morgan), seamlessly jamming with electro-rhythm adrenalin, heavy metal riffs and the full-blast heroism of the Skywalker Symphony Orchestra.

It’s dizzyingly fun stuff that’s truly glued together by Lennertz’s strong themes, melodic construction that proves to be the best example of this hybrid outlaw-alien musical genre yet, one that’s likely to live on far longer in the video game arena than the big screen. But whether you’ve got a PS3 or not, STARHAWK proves a terrifically fun, furiously galloping listen on any old CD console.