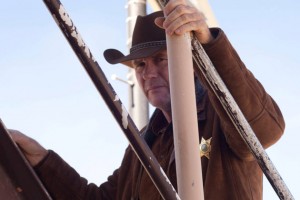 In the first-season finale of LONGMIRE, tonight on A&E at 10 PM, matters reach a boiling point between Absaroka County, Wyoming Sheriff Walt Longmire (Robert Taylor) and Deputy Branch Connally (Bailey Chase) over personal and professional matters. Based on the novels by Craig Johnson, LONGMIRE deals with not only criminal investigation in the wide-open spaces, but its characters and the environment they inhabit.

Executive producer John Coveny, who is one of LONGMIRE’s show runners with his writing partner Hunt Baldwin, talks about where the show has been in its first season and what we can look forward to in Season Two – and perhaps beyond.

ASSIGNMENT X: Are you happy with the audience response LONGMIRE has received?

JOHN COVENY: I am beyond happy with the response. We knew we had a special show from the acting to the writing to the crew, and we were hoping for a nice launch, given the support of A&E, but keeping the audience, holding the audience, building the audience, doing really strong numbers that A&E hasn’t seen in a long, long time, that makes you feel really good about it. So yes, I feel very good.

AX: Once LONGMIRE started playing, have you been tweaking it at all one way or the other?

COVENY: A lot of times, it’s too late to tweak, because you’ve already shot a lot of footage by the time you’ve learned something, but I will say the tweaking has been minimal. We stuck to a game plan of a certain type of pacing, and that pacing has seemed to really resonate with a lot of the audience. What we have taken from this season is, we’ve learned a lot about our characters and we’re taking that learning and [using] it for Season Two.

AX: Now, one could say that the relationship between Walt Longmire and Branch Connally, who is one of Walt’s deputies, has gotten contentious …

COVENY: Yes. You’re going to see the dynamic that’s going to play out with Branch and Walt is first-string, second-string up and comer always playing out. I will tell you that in the finale, things come to a head between two men who are vying for the same position, and it’s not about hanging chads, it’s about deep issues between two guys who have got to settle things. So that’s fun. I’ve seen those scenes, and they’re pretty fun for the audience.

AX: But is it going to get so ferocious that we might lose a character come second season?

COVENY: I will tell you, no one gets lost in Season Two. Everyone is coming back, and Branch Connally is too good a character to lose in Season Seven, let alone Season Two. We think there’s a way for the audience to go on a journey with Walt and Branch of two ways of looking at life, which is what you get with both those men.

COVENY: Not at all. It was a random name we picked out from the book, because the Connally name was in the books and we created this character. Branch is actually not a name in the novels, but the family name is.

AX: Will Season Two be more arced in story terms than Season One?

COVENY: Well, it depends on the order [for the number of episodes] we get. Now that we’ve set the characters up, you’re going to see a lot more arcs for all the characters. We’ve set up Branch a little bit with Cady [Walt’s daughter, played by Cassidy Freeman], we set up Cady, we set up Vic Moretti, [who is] Katee Sackhoff’s character, Henry Standing Bear [played by Lou Diamond Phillips] we’re digging into a little bit more, so you’re going to see a lot more of those issues come to light in Season Two, now that we’ve set the stage and the audience has come to know them.

AX: Between LONGMIRE and JUSTIFIED and HELL ON WHEELS, the television Western seems to be making a good comeback on basic cable.

COVENY: How about that.

AX: Do you have any thoughts on why this resurgence is happening now? Do you think the Western might have come back sooner if people had just let it, or do you think there’s something in the air now?

COVENY: The Western, by its very nature, at least in my mind, is one man who feels wronged [and goes up] against the system to right that wrong, whether it’s the town was taken over by the bad guy, my wife was killed by the bad people – all those one-man-against-the-machine type of [stories]. I think what happened toAmerica is, in 2007, 2008, the bubble burst and suddenly we all got hit in the gut, got knocked down, and the Western is about getting back up and getting back on the horse. And with Walt, you’ve got a guy who gets back on the horse with a little bit more hope in him, without that darkness, and I think people are looking for someone who can be them and show them pain, without showing them the wrong way of life. Longmire’s a guy who’s not a man of dark, deep, drug-addicted flaws. He’s a pained man who every American can see every wrinkle on his face, could say, “I’m either going to get those wrinkles, or I have those wrinkles.”

AX: Speaking of getting wrinkles, has production gotten any easier or harder as you’ve gone along?

COVENY: Yes and yes. It’s been easier sometimes, and harder. When you’re at ten thousand feet shooting a scene and getting everyone up and down the mountain, it’s a spectacular, lean, mobile, smart crew, and our cameramen, our grips know how to get stuff up and off that mountain for those scenes. So it’s a challenge each week. But that’s why we do the show, so when you watch LONGMIRE, you don’t get a man talking in a jail cell for forty-two minutes, you get these beautiful expanses that you can escape to, you get this amazing vista that you don’t see a lot on television. And that’s why all these people work so hard to bring you that.

AX: Are there any particular location shots that we should watch for?

COVENY: Well, you should look for a lot of elk. In the final episode, you should look for a lot of amazing vistas, because when the sun was hitting just right and the cloud cover was happening just so, you really find yourself loving the American landscape on this show. What’s amazing is, I’ve been on scouts and locations where I’ll be walking through the woods where they tell me there are wild horses, and suddenly someone will scream, “Look out!” and here come three wild horses running at you and you’ve got to grab a tree and let them go by, but I wouldn’t have it any other way. That’s why we come out here, that’s the Wyoming West we want to capture.

COVENY: We are shooting in New Mexico. We would love to shoot in Wyoming, but between weather inconsistencies of production and practicalities – you can’t shoot there because it might snow or rain. And then all the crew is in Santa Fe in New Mexico, and we go north and we do everything we can, and this is key for people, to bring Wyoming to life. One of the best compliments I’ve seen is from writers, critics, fans who’ve said, “I had no idea it was not shot in Wyoming.” When they hear “New Mexico,” they might get kind of mad, but we make a point to celebrate the state.

AX: Do you see an endpoint for LONGMIRE – I mean, is it like LOST, where the story needs to build to a certain point and end, or can you go like GUNSMOKE for twenty seasons?

COVENY: Well, [if it runs] for twenty seasons, we’re going to look at a very senior citizen version of Walt Longmire, but that’s not out of the question. I would love twenty seasons. I will say I see this show going for a long time, because the themes, the actors and the characters, are timeless. You can keep going and going and going, because people are tuning in to leave their daily lives and go toWyoming, andWyoming is a beautiful country, [and] we write characters that you keep going back to.

AX: Do you have any other projects that you can say anything about at this time?

COVENY: I’m always developing ideas with my writing partner Hunt Baldwin and our lovely producing team of Greer Shephard and Michael Robin, but my passion and my pride and all the team’s pride is LONGMIRE. And that’s a show we want to see go for, hopefully like you said, twenty years.

AX: And what would you most like people to know right now about LONGMIRE?

COVENY: Well, that’s a good question. I think ultimately, it’s a show you should be watching because it takes you to a place you just don’t see on television. My friends and some of the fans have said, “This show soothes me.” And if you ever wanted a show to soothe you and make you think and make you feel and experience a life that you don’t necessarily get to see no matter where you live, and I grew up in Atlanta, Georgia, this show helps you go to a place you’ve really never been and to see a face like Robert Taylor you just don’t see on television.