Exclusive Interview: Annie Potts on THE MUSIC TEACHER for the Hallmark Channel 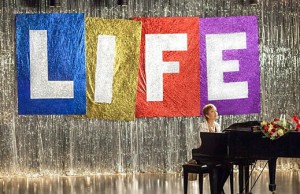 High school musicals remain pretty popular both in the real world and on the large and small screens. Now Hallmark Channel is getting into the act, so to speak, with THE MUSIC TEACHER, which premieres Saturday, Aug. 1, at 9 PM. Annie Potts plays the title character, whose former students rally round her when her school program is threatened with closure.

It’s easy to understand why people would come to Potts’ defense. The Kentucky-born actress has been charming audiences since she appeared opposite Mark Hamill at the height of his STAR WARS fame in 1978’s CORVETTE SUMMER. Potts also starred from 1986 through 1993 in CBS’ half-hour comedy DESIGNING WOMEN, then in three seasons of LOVE AND WAR and then in the four seasons of ANY DAY NOW, a period drama about the effect of the civil rights movement on several families. Genre fans know Potts from her role as the sharp Janine Melnitz in the two GHOSTBUSTERS films.

Earlier this year, Potts starred as Dallas, Texasmatriarch Gigi Stopper in ABC’s dramedy GCB, which was not picked up for a second season.

At a luncheon hosted by Hallmark for the Television Critics Association, Potts talks about THE MUSIC TEACHER, the end of GCB and more.

ASSIGNMENT X: How did you become involved in THE MUSIC TEACHER?

POTTS: It was happening in the spring, before I found out about [the cancellation of GCB]. I assumed it would be coming back and I thought, “Oh, good, I’ll do this little movie and maybe have some time off before I go back to work.” I think this is the second thing I’ve done for Hallmark, but my time at Hallmark, they’ve been very good to me. So now I’m on the loose, hoping something comes up soon.

AX: Is the subject matter of MUSIC TEACHER near to your heart, as far as promoting getting the arts back into schools?

POTTS: Well, yes. I feel like anything I can do to that end is a good thing. With the economy being what it is and all, it’s rough, and arts programs are the first to go, and it’s wrong.

AX: Have you been in stage musicals yourself?

POTTS: Early in my career.

AX: Is THE MUSIC TEACHER sort of a return to those roots?

POTTS: No. I sing a little in it – I sing a lovely little song, but you know.

AX: How is it playing a teacher with a bunch of younger costars?

POTTS: Well, they were in their twenties. They were just great, these kids. I love them and we shot it in thirteen days. It’s a miracle that it gets done. It was very ambitious without the big budget that GLEE gives its stuff. But I think that people will love it. It’s very sweet. And it’s American as apple pie.

AX: How did you feel about the end of GCB?

POTTS: Well, I was very sad. I thought it wouldn’t end for awhile, so I was disappointed that it didn’t get picked up, but what can you do?

AX: How did you become involved in GCB? Were you looking to do a series at that time?

POTTS: I was wanting to do a series, and my youngest son had two more years in high school, so I felt like I needed to nail myself down for at least two more years, and I saw it in the trades [that a show was being made at that time entitled] “GOOD CHRISTIAN BITCHES,” and I called my folks and I said, “There’s got to be something for me in that.” Boy, was I right [laughs]. I never had to work so little on anything in my life, you know? It’s like the only work was getting suited up in all the couture rig and then [I was] good to go.

AX: Did you enjoy the couture costumes?

POTTS: I’m more of a yoga pants kind of girl, but it’s fun to do.

POTTS: I have had a lot of good fortune in my television career, wonderful strong women, with DESIGNING WOMEN and ANY DAY NOW, that role and that subject matter. This would be sort of the trifecta for me to do – after DESIGNING WOMEN, which I thought was so avant for its time and then to do ANY DAY NOW, about race. [GCB] is about a lot of things, but I think, aside from being a lot of fun, it’s about hypocrisy and religion.

AX: Your character Gigi seemed somewhat removed from you in real life, at least in terms of her political views …

POTTS: Yes. My dear friend [the late] Dixie [Carter] was very conservative and of course she played a very liberal character on DESIGNING WOMEN and sometimes, she would be like, “Oh, my God, I can’t believe I have to say this.” And of course, I’m sort of famously liberal and [in GCB was] playing a conservative, so turnabout.

POTTS: It [was] so fun for me to be in a room where there’s a lot of estrogen. I got to bathe in that, instead of these people running around lighting their farts on fire. It was just so refreshing. Boys, they’re rough.

AX: Have you heard anything about the rumored GHOSTBUSTERS III film?

POTTS: I don’t have a contract, but I hear it’s going to happen.

AX: Would you be looking forward to reprising your role as Janine?

AX: Might she be a little more assertive this time around?

AX: Is there anything you do for fun?

POTTS: Anything’s fun. Work is fun for me. I’m busy.

AX: Anything else you’d like to say about THE MUSIC TEACHER?