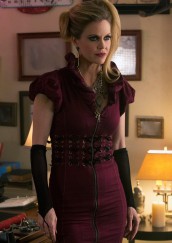 The tension continues to ramp up as we lose a few characters, several of them beloved

There are moments in the TRUE BLOOD episode “Gone, Gone, Gone” where we may be tempted to gasp in dismay as we lose up to four characters, perhaps permanently, two of whom have been with us from the start.

The first to go is Bon Temps coroner Mike Spencer (John Billingsley), who comes to Sookie’s (Anna Paquin) home apparently seeking shelter from vampires. However, once Sookie lets him in, she discovers to her chagrin that Mike now is a vampire, forcing her to stake him with chopsticks.

Hoyt Fortenberry (Jim Parrack) has decided to leave Bon Temps for a job inAlaska. As a going-away present, Hoyt begs his vampire ex Jessica (Deborah Ann Woll) to glamour him so that he won’t remember loving her or anything about his lifelong best friend Jason (Ryan Kwanten). Jessica and Jason are both devastated, but Jessica honors Hoyt’s request.

At Vampire Authority headquarters, Molly (Tina Majorino) is executed by Bill (Stephen Moyer) – with the agreement of the rest of the Authority – for her part in trying to escape and for being a mainstreamer.

Bill, however, still wants to spare Eric (Alexander Skarsgard), as Eric saved Bill’s life previously. Eric would prefer the True Death to embracing Lilith. Over Eric’s objections, Bill gives both Eric and Nora Lilith’s blood. Eric is then left alone with his vampire “sister” Nora (Lucy Griffith), a true believer. The pair are visited by an apparition of their sire Godric (Allan Hyde), who said Lilith (Jessica Clark) is “a godless god.” Lilith appears and rips out Godric’s throat. Bill can’t see what Eric and Nora see, but he can tell that something significant has happened.

Eric claims to have been converted to the vampire religion by the experience. However, when he says to Russell Edgington (Denis O’Hare) that he’s willing to make peace, given Eric’s lifelong rage at Russell for killing his human family, we suspect this may be an act.

Bill has his troops pick up Jessica, as she is his progeny and he wants both to protect her and to indoctrinate her into his newfound belief in the vampire religion. Jessica is skeptical – her human family was fundamentalist, so she knows the signs. Bill, for now, just leaves her with the vampire Bible.

Shapeshifter Luna (Janina Gavankar) is distraught that Russell and his new boyfriend Steve Newlin (Michael McMillian) have stolen her little daughter Emma in wolf-puppy form. Luna’s boyfriend and fellow shapeshifter Sam (Sam Trammell) accompanies Luna while they infiltrate a television studio where Steve is doing a televised debate with an anti-vampire activist. Steve is as usual lying his teeth off. Alas, Emma isn’t here, so Sam and Luna shift into mouse form and sneak into Steve’s bag, so they are with him undetected when he returns to Authority headquarters. Steve reprimands little Emma (Chloe Noelle) for turning back into human form, unaware that Luna and Sam (still mice) are witnessing the scene.

Elijah (Kerman Malicki-Sanchez), the new Sheriff of Area Five, tells Pam (Kristin Bauer van Straten) that she must either make thirty new vampires within the year or else surrender the bar Fangtasia and her progeny: Tara (Rutina Wesley). Pam privately tellsTarathey can ditch the bar and live “in the wind” together, as Pam and Eric used to do.Tara, however, takes a more assertive approach to the situation. She lures Elijah into a private room under the guise of having botched a siring, then cuts his head off, declaring the she and Pam aren’t going to be run off by anybody.Tarathus achieves the virtually impossible – she impresses Pam.

Russell, meanwhile, just can’t help being a uniter. He suggests that vampires can evolve further by being able to walk in the daylight, courtesy of faerie blood. He is referring to Sookie, which makes Bill and Eric uncomfortable, but then Russell goes further, suggesting that the vampires find a way to synthesize faerie blood so its effects (allowing vamps to walk in the sunlight) will last longer. When Salome says this is blasphemy and faeries are an abomination, Russell tosses her against a wall. He’s three thousand years old, more powerful than the rest of them put together and – shock of shocks to Salome, if not to the audience – doesn’t believe a word of the religious orthodoxy he’s been spouting.

Sookie and Jason, meanwhile, find an ancient parchment hidden beneath Sookie’s bed. They take it back into Faerie to get in translated. Maurella (Kristina Anapau), now very pregnant (with the child of Sheriff Andy), says that it’s a contract from 1702 that gives over the next female faerie born into the Stackhouse family to the vampire Warlow. And no female faeries have been born into the family – until Sookie.

While this explains why the mysterious Worlow was so eager to get his hands on Sookie from way back, it doesn’t explain where he’s been all this time. This plot development also doesn’t carry quite the kick of terror that it should, since Sookie is almost always being menaced by vampires, ancient contract or no ancient contract. Still, it’s nice to see more information about Sookie’s mythology come to the fore (and are we going to find out that maybe Jason has a different daddy than Sookie, which would explain his absolute lack of supernatural aspect?).

On other fronts, however, “Gone, Gone, Gone” really is suspenseful. We can’t wait for Luna and Sam to confront Steve or to see what the hell will happen next with Russell, the Authority, Bill and Eric. Kudos once more to O’Hare for having such a blast as Russell and showing us the embodiment of three thousand years of distilled ego.

Moyer is also quite intriguing to watch as Bill goes through a variety of nuanced changes, sometimes doubting himself, sometimes purring with the confidence of the self-righteous.

As for Wesley asTara, she proves that having the character vamped was a stroke of narrative genius. LettingTaracome into full no-holds-barred badassdom is a perfect matchup of actress, character and cause that is a joy to behold. The Tara and Pam Show hasn’t even hit its full potential yet, but from the bits we see here, it’s already a winner.

It’s a shame that Alcide (Joe Manganiello) is missing in action for this episode, and Lafayette (the terrific Nelsan Ellis) is seen only briefly, but what we get from those present is pretty exciting. Hoyt’s departure is genuinely affecting, not only because we’ll miss him but because of the effect his leaving has on Jessica and especially Jason. We can’t help but think, Alaska? Is TRUE BLOOD going to do a 30 DAYS OF NIGHT crossover?

“Gone, Gone, Gone” packs a good wallop and makes us want to see how everything plays out.