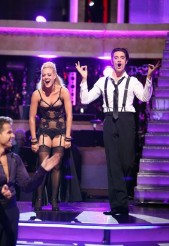 DANCING WITH THE STARS: ALL-STARS Season 15 Recap: Near perfection for Gilles Marini and Shawn Johnson

Gilles and Shawn dance to to the top on DWTS - Week 4. Paula Abdul joins the judging table as a guest 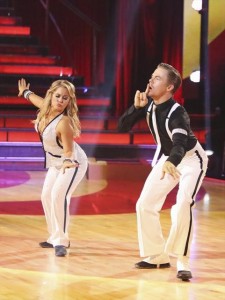 If that wasn’t one of the best DANCING WITH THE STARS shows ever I don’t know what else they could do! There were no amateurs on the floor tonight. The pros up’ed their choreography to compete as if their celeb partners were just that partners and not students. The difficulty of the routines danced tonight have been unseen ‘til now. Not even in the finales have such extensive and elaborate performances been attempted much less mastered.

Gilles Marini & Peta Murgatroyd nearly earned a perfect score – c’mon grumpy Goodman – with their Bollywood number, along with Shawn Johnson & Derek Hough the two duos earned a 39.5 out of 40. The extra set of scores came from guest judge Paula Abdul. Kelly Monaco & Val Chmerkovskiy – is it me or did those two look pissed the whole night? – landed a 37.5 while Melissa Rycroft & Tony Dovolani – the complete opposite of Val and Kelly, all smiles – received a 37.  Emmitt Smith & Cheryl Burke earned a 36 and Sabrina Bryan & Louis Van Amstel got a 35.5 Apolo Anton Ohno  & Karina Smirnoff ended the night with a 34.5. At the bottom were Bristol Palin & Mark Ballas with a 32 and Kirstie Alley & Maks Chmerkovskiy with a 30.

The best part of the evening was seeing the pros out of their comfort zone with dances they’ve never even tried before. Some of them were brought to tears trying to figure out how to teach their partner a dance they themselves had never done. Still, the intensity is at a peak now and never has the competition been so tough and the bar set so high. Partnerships have been formed and the All Stars have risen to the challenge, save Palin and maybe Alley. Now, these non- dancers have to just keep it up for the next 6 weeks!

Melissa Rycroft (TV reality star) and her partner Tony Dovolani
The lifts were outstanding except one. Len Goodman called her a class dancer. Carrie Ann Inaba said she made her Jitterbug look effortless. Bruno Tonioli touted her as a swinger. Paula Abdul said she and her partner Dovolani look like they’ve danced together forever.
Scores: Inaba – 9, Goodman – 9, Tonioli – 9.5, Abdul – 9.5, Harland – 9.5

Kelly Monaco (actress) and her partner Val Chmerkovskiy
Nasty Girl! Goodman thought she was a big revelation this season. Tonioli said her Contemporary performance was emotionally charged. Abdul told her to be proud of herself. Inaba thought that she clearly laid her heart out in the dance.
Scores: Inaba – 9, Goodman – 9.5, Tonioli – 9.5, Abdul – 9.5, Harland – 9

Emmitt Smith (Ex-NFL’er) and his partner Cheryl Burke
Not his best dance but a good effort. Goodman thought he had lovely fluidity with his Bolero. Inaba called it beautiful. Abdul called it sensual. Tonioli said it was tangible.
Scores: Inaba – 9, Goodman – 9, Tonioli – 9, Abdul – 9, Harland – 8

Shawn Johnson (Olympic gymnast) and her partner Derek Hough
An extremely difficult dance down to perfection! Inaba said she was on fire. Tonioli said her Mambo was mesmerizing. Goodman said he liked it. Abdul said it was her favorite.
Scores: Inaba – 10, Goodman – 9.5, Tonioli – 10, Abdul – 10, Harland – 10

Kirstie Alley (actress) and her partner Maksim Chmerkovskiy
Comical! Goodman said for fun she is the best. Tonioli called her a madwoman. Abdul said it was a joy to watch her dance the Charleston. Inaba said she played to her strengths.
Scores: Inaba – 7.5, Goodman – 7.5, Tonioli – 7.5, Abdul – 7.5, Harland – 8

Gilles Marini (actor) and his partner Peta Murgatroyd
Crazy fast and tough – insane! Goodman said it was fabulous. Inaba said Aladdin had nothing on him. Tonioli called him a Bollywood superstar. Abdul said he was smoldering in his Bollywood ballet.
Scores: Inaba – 10, Goodman – 9.5, Tonioli – 10, Abdul – 10, Harland – 9.5

Who’s going home: It all depends on who has a bigger fan base – Alley or Palin!

Who Has Legs To Take Home The Mirror Ball: Johnson vs. Marini…who will take it all!?