dancing with the stars bristol palin 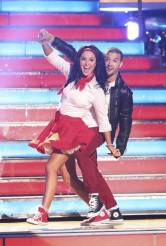 DANCING WITH THE STARS: ALL-STARS Season 15 Recap: Bristol Palin kicked off and loses the vote

Sarah Palin's daughter is out in Week Four on DWTS! 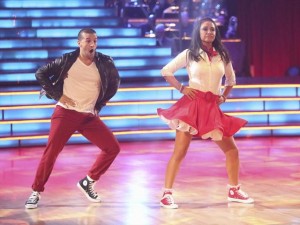 Mark Ballas and Bristol Palin perform during Week 4 on DANCING WITH THE STARS: ALL-STARS | ©2012 ABC/Adam Taylor

Sometimes it plays out the way it should, like tonight on DANCING WITH THE STARS and other times, well, we know what happens. Apparently the red party was too busy focusing on taking over The White House instead of stuffing the DWTS  perpetual voting box, and thus Bristol Palin & Mark Ballas were voted off the show in week four. Kirstie Alley & Maksim Chmerkovskiy proved they have a bigger fan base than Palin since they were actually the couple who placed last. Still, it was time for Palin to go although she showed tremendous growth in her ability this season, she was no competition for the others.

The DWTS Troupe opened the show with a highly ta’do number before we heard that Shawn Johnson & Derek Hough, Kelly Monaco & Val Chmerkovskiy and Sabrina Bryan & Louis Van Amstel were all safe. In jeopardy right off the bat were Palin & Ballas. Former competitor and on and off video corespondent Carson Kressly showed us a little ditty about the behind the scenes of the show before we watched the Macy’s Stars of Dance performance.

Next safe were Gilles Marini & Peta Murgatroyd and Emmitt Smith & Cheryl Burke. Surprisingly, Apolo Anton Ohno & Karina Smirnoff were said to be in jeopardy, although later on we found out that wasn’t exactly true.

Burke danced with some old dance mates from childhood and then Melissa Rycroft & Tony Dovolani were next on the safe for another week list. Season Nine champ Donny Osmond graced the stage with musical phenom Susan Boyle – boy was she nervous. At one point Osmond grabbed her hand to help her relax. What a gentleman!

Then it was onto the team dance picks. Next week it will be Team Gilles vs. Team Shawn. Marini & Murgatroyd’s team consists of Monaco & Chmerkovskiy, Alley & Chmerkovskiy and Smith & Burke. Johnson and Hough’s team is Bryan & Van Amstel, Rycroft & Dovolani and Ohno & Smirnoff.

We soon learned that Ohno & Smirnoff were not in the bottom two after all and that they,  in fact, were safe before Palin was ousted over fellow bottom two’er Alley. Eight are left, team dances are next week, the race is on to the mirror ball trophy!
Stay tuned!