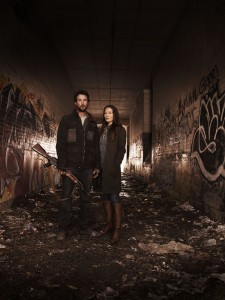 Fans of the TNT series FALLING SKIES may have wondered why there’s been such a slow burn with the budding romance between Tom (Noah Wyle) and Dr. Anne Glass (Moon Bloodgood) and at Comic-Con 2012 in San Diego, Wyle shed some light on it while speaking to the press.

“It’s very difficult to write an interpersonal romance relationship on the show when you’re always trying to establish a base level of threat being ever present,” says Wyle of the hit alien invasion series which just got renewed for Season 3. “So we write these scenes where I would be on guard duty and she’d bring me a sandwich and we’d start flirting with each other. Then we’d go to shoot them and we’d think, ‘This just doesn’t work. Doesn’t fit.’ So it became a relationship that played itself out across crowded rooms with two busy people looking at  each other and wishing circumstances were different. It was either that, or drag her into a linen closet and consummate it fast and furious. So last season we did the former and the second season we did the latter.”

As for his occasionally contentious relationship with Captain Weaver (Will Patton), Wyle sees growth with him as well. 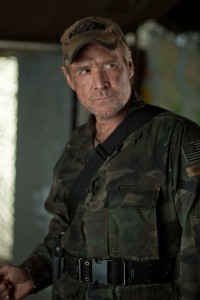 “I think of all the relationships in the show [Tom and Weaver] have probably traveled the farthest ground since the pilot when we were total adversaries and leading up to the episode that aired last week where we are actually admitting mutual respect and affection for each other and a growing awareness that really to be successful it’s going to require a certain synthesis between our two  philosophies for the good of the group,” explains Wyle. “In a lot of ways I think we  looked at this season as alternating mother and father roles to the 2nd  Massachusetts depending on the episode. Sometimes he’s the more nurturing one and I’m the hard ass and then we flip them. “