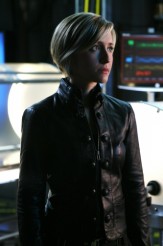 A derivative, but highly entertaining episode - and Clark finally flies (well, sort of) 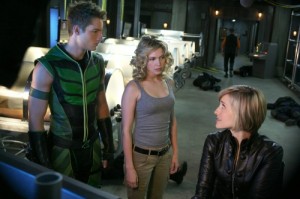 Look who’s finally back. It’s seems like a long time since we last saw a new SMALLVILLE episode, right? What’s the deal with that? No matter, Clark (Tom Welling) and company are back, and I have to say, I was impressed.

Then again, if SMALLVILLE had screwed up this episode, there would have been no hope for the season. It’s the comeback episode after a long break. It’s based off of one of the most iconic movies of the past ten years (okay, twelve years, but 1999 wasn’t that long ago, was it?), and because of the nature of the episode, SMALLVILLE had carte blanche to do just about whatever the heck they wanted, including making Clark fly.

So yes, “Collateral” had a lot of expectations to live up to, but thankfully had the tools to pull it off.

Let’s talk about one of my all time favorite movies, THE MATRIX. How cool was that concept? Humans unknowingly living a virtual life inside a giant simulation = brilliant. Humans learning how to bend the rules of the simulated world = more brilliant. Keanu Reeves spacing out for a second before uttering the words, “I know Kung Fu” = timeless movie moment.

What does this have to do with SMALLVILLE? Well if you saw “Collateral” and haven’t figured that out yet, then please, just stop reading. (Insert patient whistling) You’re still reading? Fine. Let me explain.

During Hawkman’s (Michael Shanks) funeral in Egypt during December’s last first-run episode “Icarus”, the whole gang is knocked unconscious by some weird pyramid looking thing. “Collateral” then starts with Lois (Erica Durance) looking for Clark with no explanation as to what happened.

Well, I’m here to tell you what happened. The VRA planted the pyramid device and subsequently captured the entire group (and for the record, “Collateral” never did explain how the VRA knew where Carter’s funeral would be, what that pyramid thingy was or how it worked). In an effort to quell their super powers, the VRA has plugged Clark, Lois, Oliver (Justin Hartley), and Black Canary (Alaina Huffman) into a virtual reality machine a la THE MATRIX while they study how their brains work. What ensued was a surreal episode that went all kinds of wacky as Chloe tries to help everyone escape. I think I even heard Chloe (Allison Mack) whisper to Oliver, “There is no spoon.”

So SMALLVILLE hacked the idea. So what? At least they borrowed from a pretty cool movie and had the guts to shamelessly run with it full steam. And in the end, it made for a very cool episode that allowed SMALLVILLE to do things they could never do in “real” life, like recreating the classic scene of Clark and Lois flying around Metropolis at night.

For those of you not paying attention, I just dropped two bombs in the last two paragraphs. Yes, I did just casually mention that Chloe is back. I also just mentioned that Clark flew, something that SMALLVILLE has promised would never happen (remember, no tights, no flights?). Chloe’s disappearance oh so many moths ago was in preparation for this event, allowing her to swoop in and rescue everyone. She couldn’t do that if she was captured as well, right? As for Clark, well, he didn’t really fly. It was all only in his head, remember?

“Collateral” answered a lot of questions, allowed for some cool effects and fight scenes, and overall was a lot of fun. It may have not been the most original concept, but it works. Let’s see where SMALLVILLE goes from here.