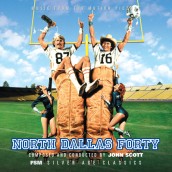 One of the more curious composer-to-picture match-ups in the 70’s was throwing John Scott, a genteel English composer renowned for such classically lush scores as ANTONY AND CLEOPATRA and THE COUSTEAU ODYSSEY, into the very macho game of football- and we aren’t talking the Euro definition of guys kicking around a pigskin.

Yet it’s exactly that strongly thematic sense of drama that let NORTH DALLAS FORTY make a memorable touchdown as one of America’s better sports films. Credit Canadian director Ted Kocheff, who’d worked with Scott on the equally unlikely Aussie thriller WAKE IN FRIGHT to let the composer make the musical plays for the North Dallas Bulls (i.e. Cowboys)- a position Scott’s library music had also prepped him for when it was used as a theme for the New York Knicks.

FORTY’s carried by a jazzy, ironic melody that draws on Scott’s nightclub days in England. Yet the score is also suffused with military suspense that anticipates when its graying athletes’ bodies will finally break down, a dark tone that might make you think you’ve stumbled upon a spy score, if it weren’t for the brassy grooves that are always running disco-funk maneuvers across the field.

Scott’s score (available in this limited edition release) occupies the emotional point spread of players-will-be-players comedy and the ultimate, bone-crunching trip off the field the characters know is coming- and fear for all of the pop swaggering that Scott knowingly provides.