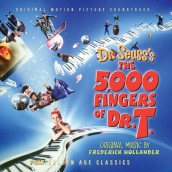 It's time to play it all with Dr. Terwilliker

There were some pretty bizarre kids’ movies back in the day like SANTA CLAUS CONQUERS THE MARTIANS. But no now grown-up cult item still has the tuneful catchiness of 1953’s 5,000 FINGERS OF DR. T, which stands as the only insane collaboration between uber-serious producer Stanley Kramer, phantasmagorical children’s author Dr. Seuss, and Friedrich Hollaender, a German cabaret composer whose political whimsy would see him sent packing from Nazi land to a Hollywood career.

This colorful fantasy about a piano-hating kid’s ultimate bad dream would see Hollaender put Seuss’ wonderful gibberish to melody, resulting in a number of tongue-twisting delights like “Freckle On A Pygmy,”  “Get Together Weather,” and “The Dressing Song,” the best lyrics of which slip from the high-pitched tones of Dr. Terwilliker (as embodied by the FRACTURED FAIRY TALES-familiar voice of Hans Conried).

DR. T is the musical equivalent of reading “The Cat and the Hat,” a mix of satire and nursery rhyme whimsy that has the fun of a smarty-pants kid razzing a highfalutin concert. Hollaender and Seuss get great kicks at the expense of classical music’s pomp and circumstance with “The Massage Opera” and “Butterfly Ballet,” while the “Dungeon Shim Shlam” employs tinkertoy-jazz percussion as performed by human instruments. But the one T song that takes the cake is “The Dungeon Elevator,” whose operator lists off various tortures as if he was descending down the levels of Dante’s department store. Better yet for T’s legion of fans, every note, and finger of its soundtrack is handsomely collected onto three CD’s for Film Score Monthly’s obvious labor of fanboy love.