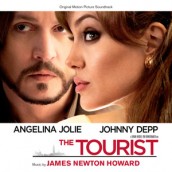 Forget Johnny Depp. No man is proving to be a more reliable companion to Angelina Jolie’s mysterious allure like James Newton Howard, who turns in his second terrific score for the actress after this year’s SALT. While there’s a surfeit of that film’s ballsy spy action here, THE TOURIST is mostly plying the same kind of luxurious, old-world waters that Henry Mancini and John Barry did when movies like CHARADE and FROM RUSSIA WITH LOVE were the height of escapist fashion- a throwback appeal that THE TOURIST pulls off with panache.

Most of this music is the elegant equivalent of beautiful people, well-appointed hotel rooms and a dangerous attraction to the man with a suspect past (or woman in the case of this enjoyable lark, as Depp’s playing Audrey Hepburn opposite Jolie’s Cary Grant).

James Newton Howard does a great job of pouring on the swelling glitz from opera-waltz pastiches to the Italiano accordions and classical appeal of Venice, cleverly using a piano to play the characters’ playfully furtive attraction, while wrapping Jolie about in a sometimes-sinister allure that would do Catherine Tramell proud. And when it comes to the action stuff, Howard mixes up the bright, movie-movie orchestrations with techno rhythms just to keep things current, a la his other bouncily percussive Euro-centric score for DUPLICITY.

From fun start to finish on our trip down the dangerously romantic byways of Venice, there’s no denying the old-school charm that THE TOURIST’s score has in spades, music that plays the glamorous stuff that stars like Jolie are made of.

Take another cool trip with James and Angelina HERE