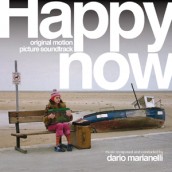 The composer of V FOR VENDETTA reveals his goofy side

Euro-specialist label Movie Score Media now goes digging into the ghosts of their favored composers’ pasts with their “Discovery Collection”- a cool niche within a niche that reveals what might be a real spook with 2001’s long-buried score to HAPPY NOW. And it’s likely that ATONEMENT Oscar winner Dario Marianelli is similarly smiling due to the light that MSM is shining on his atypically wacky mystery score for an uber-serious composer, one which chronicles a Welsh politician’s amazement that the girl he and his mate most definitely murdered years ago is now back in town.

Listening to the soundtrack’s Theremin-like effects, tinkertoy whistling, Spaghetti Western riffs, harmonica playing and symphonic stylings that take equal winks at Bernard Herrmann and the classical waltzes, you’d think that Marianelli would’ve turned into an eccentric comedy composer along the lines of Rolfe Kent, instead of becoming the excellent, and oh-so dramatic composer of V FOR VENDETTA and PRIDE AND PREJUDICE. As is, HAPPY NOW is the closest we’ll get to Marianelli scoring a SCOOBY DOO episode, his delightfully inventive work playing the trappings of cartoon music while also keeping a somewhat straight face. HAPPY NOW is fun enough to make you wish Marianelli would rush to score the next talking animal picture that Hollywood thinks they could never throw at him.

Get some unexpected laughs with Dario Marianelli’s music HERE