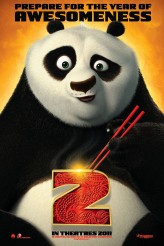 A beautiful sequel with even more heart than the first film

In a summer filled with lots of sequels, it’s not that easy to pick and choose which ones will be hits and which will be misses. KUNG FU PANDA 2 is one of the hits in my book. This animated sequel from Dreamworks picks up pretty much where the last movie left off. Po (Jack Black) is the Dragon Warrior and he fights for justice alongside the Furious Five. Comfortable in his role as the Dragon Warrior, Po now has to deal with memories of his own past returning and while he and the Five set off to stop the villainous Lord Shen (Gary Oldman), Po also sets out on a quest that will ultimately lead him to the answers of his origins that he has been longing to find.

Dreamworks has always been an excellent animation studio. I fell in love with their animated features back around the time of THE PRINCE OF EGYPT, and have seen pretty much everything since then. I like the fact that the storytelling and animation are easily on par with what Disney or Pixar turns out, but there is something in Dreamworks films that set them apart. The storylines and characters, no matter what they are seem a little more attainable to an audience, and even though many of these are fables of sort, they don’t always have to do with royalty or living happily ever after.

It was pointed out to me after seeing this movie, that another significant difference between Dreamworks and Disney – Dreamworks animated sequels WORK. Pixar aside, Disney has crap luck with animated sequels. Most end up straight to home market, and are severely lacking in quality compared to the originals. Just take a look at all of the CINDERELLA sequels if you want an example. Dreamworks on the other hand has made sequels to most of their animated features, and they all work, and in lots of cases they improve on the original.

I really enjoyed the first PANDA, which was a destiny’s path film – where the lead character had a path to follow to get to where he needed to be. This time around I almost felt like the film had a bit more heart. A lot of the story has to deal with family both blood and adopted, and there are some really moving moments both in the flashbacks, and also in scenes between Po and his adopted father.

The voice cast led by Jack Black is as fun as the original, and all of the actors perform exceptionally well. Lord Shen is one of my favorites for this film, as well as the Soothsayer (Michelle Yeoh). All of the cast returns from the first movie as well, and it helps to create a nice symmetry between the two movies.

In PANDA 2, the art direction and animation are breathtaking. The designs on Lord Shen alone are some of the most beautiful that I’ve ever seen in an animated movie. The backgrounds for PANDA 1 & 2 are so picture perfect – you would almost swear they were real, but then you realize that real doesn’t even look that good. The film also looks amazing in 3D. The art and different sequences really lend themselves to the 3D medium, and the final battle alone is completely worth seeing in 3D.