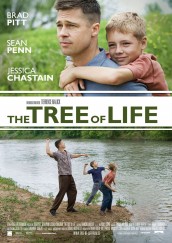 A movie that is physically beautiful, clearly very personal and pretty baffling

If the definition of a good movie is one that achieves its creator’s goals, THE TREE OF LIFE is possibly great. However, if the definition is also a movie that connects with its audience, TREE is a lot less great. Writer/director Terrence Malick has really huge ideas going on here – contrasting the enormity of creation, both on this planet and in the cosmos – with the details of life within a single family. The results are visually gorgeous, thanks in large part to the work of cinematographer Emmanuel Lubezki and a crack special effects team, but also so elliptical that it’s difficult to connect with the elements emotionally (or even intellectually) for any length of time.

Near the beginning, Mrs. O’Brien (Jessica Chastain) receives notification that one of her sons has died. Distraught, she informs her husband, Mr. O’Brien (Brad Pitt). The film then flashes back to the 1950s, when all three of the O’Brien boys – Jack (Hunter McCracken), R.I. (Laramie Eppler) and Steve (Tye Sheridan) – were children. Mr. O’Brien is in his way a loving father, but he is also tyrannical, which doesn’t sit well with his family. We see that Mr. O’Brien’s business failures take their toll on his self-worth, causing him to act out at home. The boys take solace in their mother’s unconditional love, although this doesn’t provide all the answers that Jack seeks. As an adult, Jack (Sean Penn) and his father speak on the phone, still working on their relationship. Interspersed between all this, we see jellyfish, interstellar phenomena, rushing water and what may be a glimpse of Heaven, or at least Jack’s version of it.

It’s a testament to Malick’s filmmaking skill that we do become somewhat engaged in Jack’s childhood struggles with his father’s authority, his mild Oedipal issues and his other growing-up issues. The three young actors playing the O’Brien boys are all very natural. Pitt, playing a gruff, harried Everyman, shows solid character acting chops and Chastain is the epitome of kindness and warmth as the beloved wife/mother. Penn gets very little to do, but he does it well.

The symbolism in TREE OF LIFE may match perfectly with what is in Malick’s heart and mind, and some viewers may find it revelatory, but this reviewer didn’t feel that it resonated, except in terms of admiring the optical beauty of what is being shown. The utter lack of a conventional narrative thread is frustrating, especially because the order of what we see – childhood, Jack as an adult, natural and galactic wonders – doesn’t have a readily graspable pattern. This may well be part of the point: the universe exists whether we’re living our lives or reflecting on the past. However, there’s probably a way of embarking on this discussion that better includes the audience than it does in THE TREE OF LIFE. Then again, some people are likely to find this profound. It’s certainly not as though Malick has done anything badly in this film, he just hasn’t done it very accessibly. And that may also be part of the point.