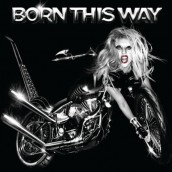 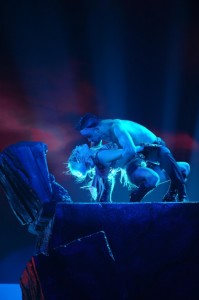 You have to hand it to Lady Gaga. She loves to let her freak flag fly, and she’s done such an amazing job of cultivating this performance-art persona, that she’s become more famous for what she wears, rather than what she’s actually singing.

That of course is the big dichotomy her career is facing. She’s clearly pushed the envelope as far as she can with her costumes, and now, she really needs to start bringing the attention back to the fact that she’s not that bad a singer and a pretty accomplished songwriter (even when she’s cribbing from the past).

Her latest CD BORN THIS WAY is an uneven collection of songs, but it’s her personality and passion that seeps through even the most ridiculous tunes (“Government Hooker” and “Hair” immediately come to mind).

This disc is definitely seeped in 1980s synth-driven Madonna-esque pop. The only difference is the technology has advanced, which means the electronic blips and bloops are a little more polished and the songs are far more layered than when Madonna was at the top of the charts.

And Madonna, for all her outward displays of attention-grabbing, never had the big balls Lady Gaga had to be unhinged enough to completely deconstruct her public persona to a point where adults might actually be afraid of her – instead of embracing her for all her positive lyrical reinforcements that being different is okay.

BORN THIS WAY has some pretty amazing tracks on it, which are so good, they make up for the so-so filler and push the grade up from a C+ to a B-.

The title track “Born This Way,” while a totally “Express Yourself” knock-off, is still a damn catchy song. The message is strong and the music gets under your skin with its aggressive beat. This is one of many songs on this album that encourage listeners to be themselves.

“Hair” continues the similar strain, paying a nod to Cyndi Lauper’s iconic “Girls Just Want To Have Fun” about a kid talking back to their parents. Here, the kid in question is talking about how their hair defines them.  “I’m the spirit of my hair/It’s all the glory I bear in my hair/I am My Hair.” As poetry, this is actually quite good, as a song, the lyrics stand out so much they become unintentionally funny. And they definitely take away from the other stronger lyrics that populate the song. Again though, the music actually transcends the silliness, making it pretty good in its own strange way.

“Bad Kids” is much better in the “be who you are” message category – again praising the need to be who you need to be whether you’re a bad kid or a nerd.

Religion plays a major part of BORN THIS WAY as well. The second single “Judas”  is an infectiously catchy and controversial track that speaks of a bad relationship in religious terms. There’s not a lot to get in an uproar here, though I can see using the word “Jesus” and “condom” in the same song might piss a few people off.

She evokes Jesus in “Bloody Mary” again for another bad relationship song. 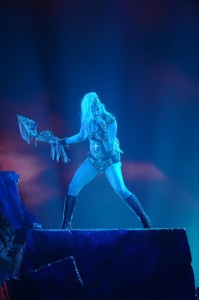 The third part of Lady Gaga’s obsession on BORN THIS WAY is with being (or not being) a hooker, bitch and whore.

“Government Hooker” is a really weird song, and probably not the strongest  to place in the number three position on an album when there are so many better songs she could have put in its place. It’s funny and a bit heavy with the button pushing, and it’s definitely the low point on the album.

She gets a bit nasty on “Heavy Metal Lover” where she claims “I want your whisky mouth/all over my blonde south” and this kind of imagery is peppered liberally throughout the entire disc whether it fits or not.

I’m also not much of a fan of her trying to be trilingual on the album. “Americano” is a good song, but I never cared much for “Alejandro” on her previous album, so this just seems like an unnecessary grab for a similar vibe. The German laced “Scheiße” doesn’t do much for me either.

Yet, for its uneven tone, the good songs are exceptional. Lead-off track “Marry The Night” is quite good dealing love on the run and like “Born this Way,” you won’t be able to shake the chorus from your head for days.

“(Highway Unicorn) Road to Love” is another poppy quasi-love song about how loneliness leads to the promise of stronger love.

“Yoü And I” is the closest that Gaga comes to an actual normal love song. It isn’t drenched in unnecessary electronic noise either. This really showcases her amazing songwriting chops and even has a bit of a Sheryl Crow vibe to it. She doesn’t go overboard with the lyrics, and lines like “There’s only three men ima serve my whole life/It’s my daddy, Nebraska and Jesus Christ” are superbly crafted. She also gets to actually sing the bluesy chorus with a gusto that gets lost sometimes amid the synth drones on the rest of the disc. This is Gaga’s soulful side that I’d like to see a bit more of.

And, strangely the album concludes with my favorite song on the entire disc “The Edge of Glory.” There’s a Bonnie Tyler (circa “Total Eclipse of the Heart”) vibe to this track which accelerates throughout the track. If the whole album is about ridding yourself of bad relationships, learning to live with who you are, having faith and taking a chance on love, “The Edge of Glory” is Gaga’s concluding statement of it all – it’s about finally embracing true romance. It’s getting out on the edge and giving it your all, and not looking back. Plus, she inserts this amazing saxophone solo midway through, something most pop songs abandoned in the 1980s. I’m glad she’s made playing sax hip again, because that sound has been horribly missed in pop music.

BORN THIS WAY is a perfect transition for Gaga since there’s not many more boundaries she can cross before her performance art schtick gets tired. Instead, she’s going to need to continue her evolutionary growth as a singer-songwriter. Within that, she’s really going to have to find herself. All the costumed accoutrements to her public and performing persona are just things for her to hide behind. Yes, it gets attention and makes her unique, but at some point, people will get bored with this and all she will have left is her music to define her. She has the chops and she has the skills, and hopefully on her next disc, she’ll set her sights even higher – reaching for more deeper and complex songs like “Yoü And I” and less button-pushing grabs for attention like “Government Hooker.”

And by the way,  thank Gaga and Amazon for the amazing promotion they had earlier this week where you could buy the entire disc for .99 cents (yes, .99 cents for 14 songs). Now that’s a way to really give back to your fans.