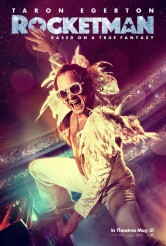 A warm hug of an R-rated musical biopic 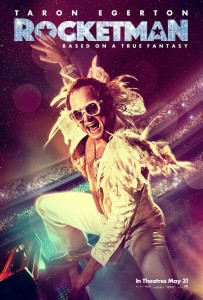 ROCKETMAN is a lovely, lively biopic of Elton John, as played here by Taron Egerton. ROCKETMAN is also a musical, not the kind that just shows its protagonist in performance, but the kind that shows people dancing in the streets and even floating in the air. To keep things sufficiently earthbound (and, for that matter, moderately plausible), there’s plenty of sex and drugs to go with the rock ‘n’ roll.

Most people who know anything about Elton John are aware of the following: he’s English, a tremendously gifted composer/pianist/singer, one of the most successful pop artists ever, he spent a long time wearing outrageous costumes, and he’s gay.

ROCKETMAN covers all of this handily, and finds an arc in a fanciful framing device. Since the movie starts with a shrewd surprise, it would be rude to spoil exactly how we meet the grown-up Elton. Suffice to say that he introduces us to himself as the little boy he used to be, Reginald Dwight (Matthew Illesley – a photo in the end credits shows an uncanny resemblance between Illesley and the actual Reg Dwight at that age). Balancing out Reg’s problematic parents (Bryce Dallas Howard, Steven Mackintosh) is nurturing grandmother Ivy (Gemma Jones), who encourages the child’s interest and talent in playing the piano.

By the time he’s a young man, Reg has redubbed himself Elton John and is playing backup for touring American groups. Then he meets lyricist Bernie Taupin (Jamie Bell), and ROCKETMAN gets an unexpected jolt of adrenaline. Taupin is heterosexual, but we never doubt his fraternal love for Elton. Bell plays Taupin with an electric sense of yearning, as though he’s found his creative soul mate and wants to fill the horizon with the songs they’ll make together.

In the face of this immense emotion, we’d be inclined to love Elton no matter what. The fact is, we’re already sold. Egerton has already demonstrated impressive range in his career, from positively Bondian in the KINGSMAN films, where he worked with Elton John, to the nerdy Michael Edwards in the sports biopic EDDIE THE EAGLE, which was helmed by ROCKETMAN director Dexter Fletcher. Here, Egerton can put panic, resentment, vulnerability, and charm altogether in the same wordless moment. We feel for him, even when he’s being bratty, because we can always see what he’s feeling in his eyes. Egerton has an agreeable singing voice, which we hear when he’s performing onscreen; he’s good enough to keep our toes tapping, even when contrasted with the actual Elton John recordings used on the soundtrack.

Besides Egerton and Bell, other standout performances are Richard Madden as Elton’s lover/manager John Reid, a stunner with a heart of pure cash register, and Howard as Elton’s mum, who seems to genuinely not understand what parenting is supposed to entail.

Fletcher was the director who, although he didn’t get screen credit, wound up completing BOHEMIAN RHAPSODY. ROCKETMAN feels like the movie BOHEMIAN RHAPSODY might have been (the musical sequences and lead Rami Malek were great; the rest of the it seemed like a well-intentioned ‘80s movie of the week). Yes, it paints a rosy picture of its protagonist, but it’s cheerfully bawdy, showing not only Elton but those in his circle joyously partaking in all that rock celebrity has to offer. It’s made very clear that Elton overdoes it destructively, but unlike a lot of finger-wagging dramas, ROCKETMAN makes the point that the real problems are excess and self-loathing. Even though ROCKETMAN has plenty of surreal moments, it feels lifelike and energetic, and like we’re going somewhere. Screenwriter Lee Hall gives the film a narrative spine, so that it flows, and Fletcher’s direction has a sense of fun that is continually engaging.

ROCKETMAN doesn’t transcend being a show business biopic. It’s got plenty of tropes, but it’s also got a sense of enormous affection for its subject. It winds up as a big, warm, sometimes raunchy hug, with lots of catchy pop tunes.