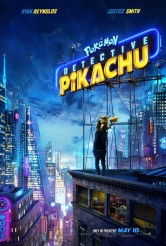 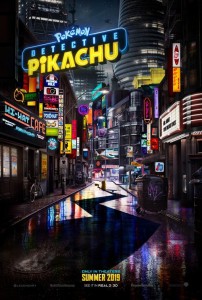 A live-action version of the game phenomenon POKEMON may not sound particularly inviting to adults. However, POKEMON DETECTIVE PIKACHU proves surprisingly enjoyable, with a consistent sense of whimsy propelling it forward.

The POKEMON game and animated series focus on youngsters capturing magical creatures, each with their own powers, and then training the creatures to fight each other in nonlethal matches. While POKEMON DETECTIVE PIKACHU acknowledges this history (and we do a see a lot of Pokemon battling each other), our story is set mostly in Ryme City.

Recalling the alternative Los Angeles of WHO FRAMED ROGER RABBIT, Ryme City has been set up by philanthropist Howard Clifford (Bill Nighy) as a shining example of civilization, where humans and Pokemon can live side by side. Although humans can’t understand Pokemon speech (and vice-versa), most humans have a devoted Pokemon partner. Some Pokemon still live wild in Ryme City, but many have their own bars, restaurants, shops and other places of business.

Tim Goodman (Justice Smith) is a young insurance salesman who has so far resisted the lure of having his own Pokemon companion. When his long-estranged police detective father is in a fatal car crash while on a case, Tim goes to Ryme City to close his father’s affairs. At his father’s apartment, Tim encounters his father’s Pokemon partner, a Pikachu (voiced by Ryan Reynolds) with amnesia. When Pikachu and Tim realize they can each understand what the other is saying, Pikachu sees this as destiny. Tim is less convinced, but Pikachu is determine that the two of them join forces to solve the mystery of what happened to the older Goodman.

We see enough of the POKEMON DETECTIVE PIKACHU world at the very beginning for us to understand we’re in an alternate reality. This heads off a lot of questions, including where we’re supposed to be (although Ryme City does have elements in common with Tokyo). It also lets us accept the simplified nature of government, finance, etc.

The screenplay, by director Rob Letterman and Dan Hernandez & Benji Samit and Derek Connolly, sensibly stays away from organized Pokemon matches. Instead, the mystery gives us an excuse to explore Ryme City and meet its eccentric denizens, many of whom have surprising powers. Turns out that even Pikachu isn’t entirely helpless. Characters are always displaying unexpected traits, and shapes, and colors, while Tim and Pikachu work out their partner issues. 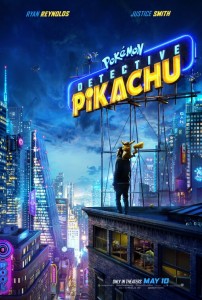 The overall story is fairly predictable in its most of its beats (with one notably clever exception). However, it’s enough to keep the characters in motion. The tartness of Reynolds’s delivery contrasts agreeably with Pikachu’s absurd cuteness; we come to actually like the little guy. Smith is very game, as is Kathryn Newton as an aspiring reporter who befriends him. Ken Watanabe is excellent as the police lieutenant in charge of the case. Nighy, as the city’s benefactor, once again demonstrates that if there’s dodgy dialogue in a piece, he’ll find a way to deliver it so that it sounds like something somebody might actually say.

POKEMON DETECTIVE PIKACHU is clearly aimed at POKEMON fans, who tend to be young. However, the filmmakers have enough grown-up quips and notions and sight gags for adults to have a good time as well. The movie has just enough edge to keep it from being too adorable (or simple) for its own good.