Home » Bones review The Stiff in the Cliff 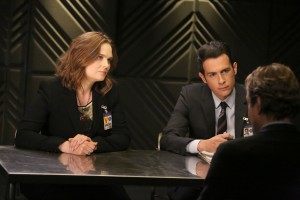 Part of the fun of BONES is seeing how the different recurring lab assistants interact with the team. In “The Stiff in the Cliff,” we get two of them, Dr. Clark Edison (Eugene Byrd) and Wendell Bray (Michael Grant Terry). Wendell has to be called in to take over from Clark, since Clark is a suspect in the case under investigation.

Brennan (Emily Deschanel) and Booth (David Boreanaz) see a news report announcing the finding of long-missing billionaire explorer Henry Charles’ corpse. Charles vanished on an expedition that found the bodies of another set of explorers from the 1800s, who apparently had engaged in cannibalism. A nonfiction bestseller was written about this by Charles’ colleague, Dr. Marcus Eldridge (John Shea). Brennan is delighted to be chosen to examine the remains. She almost immediately finds evidence he was stabbed. It turns out that when Clark was still a grad student, he was on the final Arctic expedition when Charles disappeared. Clark never put this on his resume, which seems puzzling. Once it’s determined that Charles was murdered, the omission looks bad. Brennan removes Clark from the case, as he’s now a suspect – and for good measure, Clark lawyers up.

Since Clark has always been a pillar of integrity and Byrd plays him with great rectitude, it seems unlikely he’d turn out to be a villain. Sure enough, Clark’s crime was covering up a mistake made by Hazel Mitchell (Bridgett Newton). Hazel, then Eldridge’s protégé, was also on the expedition. Hazel and Clark were lovers, Clark was in love with her – but found out the day of Charles’ disappearance that the billionaire was also involved with Hazel. Clark punched Charles.

When Charles discovered that Eldridge was altering the bones from the 1800s expedition to make it appear the earlier explorers had eaten each other, he asked Hazel for help. Rather than see her mentor be discredited and have her career go down the drain, Hazel stabbed Charles, then pushed his body off a cliff.

There’s a deft bit of working current ecological crisis into the script. The Jeffersonian team struggles to figure out how the corpse got injuries from falling from a cliff when there’s no cliff there on the map. Turns out there used to be a cliff that crumbled due to global warming. Not only is climate change terrible for the planet, it’s impeding murder investigations. Hey, whatever works to spread the word.

In another subplot, Cam (Tamara Taylor) dreads her sister Felicia’s (Raney Branch) efforts to help plan her wedding. Felicia, ready to make up for long-ago conflicts, is actually open to whatever Cam wants. This turns out to be a “princess wedding,” complete with a fancy wedding dress and personalized candy bars. The sisters bond and Felicia puts her expert organizing skills to good use.

Booth is disconcerted when it seems Brennan won’t stand up for Clark. Brennan admits at the end that she knows in her heart that Clark is innocent, but still had to follow the chain of evidence. She does write an article standing up for Clark, which causes Clark to hug Brennan (something that does not happen often).

There’s a bit of weirdness with Brennan and Booth’s young daughter Christine (Sunnie Pelant) wanting to stand up for a classmate who is being physically bullied. Brennan seems to be against any form of Christine intervening, even though Brennan has been known to punch people for less than what the classmate is enduring. In the end, Christine shows her support by sitting in the mud with her friend, who has been pushed there. It seems a little out of character, not to mention irresponsible, for Brennan and Booth not to go to the school and say, “Are you aware one of your students is being physically attacked by others?” The idea that Brennan wants her daughter to learn to stand back and do nothing while a friend is being hit and shoved doesn’t sit right.

However, it’s always nice to see most of the lab techs, who seldom get to interact with one another. Byrd and Terry have nice, empathetic chemistry. As one-hour forensic murder mysteries go, “The Stiff in the Cliff” is lively enough.