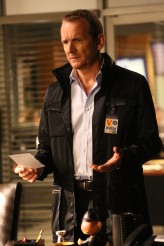 A real heist and a possible haunting 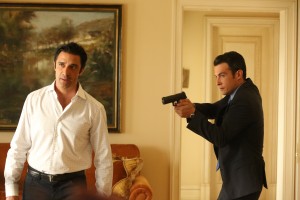 With all due respect to the A storyline in the BONES Season 11 penultimate episode “The Jewel in the Crown,” the real story here is Hodgins (TJ Thyne). When Hodgins starts seeing evidence of earthquakes that no one else can feel, he argues that people underestimate the fault lines underneath the Jeffersonian. Lab assistant Daisy Wicks (Carla Gallo) counters that Hodgins is experiencing poltergeist activity. Even though Hodgins believes in UFOs, he’s skeptical about ghosts – and Daisy realizes he’s right. Hodgins is causing the movement of objects himself, because his previously paralyzed legs are moving without him knowing about it. Hodgins, dazed, tells his wife Angela (Michaela Conlin) that perhaps he will walk again after all.

Since Hodgins has been through hell (and dragged everyone he knows with him) following the explosion that’s left him in a wheelchair, this is great news indeed.

Less exciting but still diverting is the main mystery of “The Jewel in the Crown,” which per the title, concerns precious stones. When a woman’s body is found among broken glass in a recycling plant, it doesn’t take long for the team to identify her as the Marquise de Chaussin, a woman whose husband the Marquis (Gilles Marini) is descended from French nobility. French inspector Rousseau (Sebastian Roche) has been tailing the couple, sure that the Marquis has killed his missus, but perhaps Rousseau did it himself.

Nope. The Marquise was actually a jewel thief, stealing to keep her scandal-averse husband in the lifestyle he was accustomed to. Her lover Chadwick (Tom Wisdom) killed another accomplice. Chadwick then killed the Marquise when she told him she was going to tell her husband the truth. (Why do people in these stories tell killers what they’re going to do instead of just doing it? Apart from the fact that the stories wouldn’t exist otherwise, of course.) Aubrey (John Boyd), who’s always dreamed of being Cary Grant in TO CATCH A THIEF, has a great time living out his fantasies, and Rousseau winds up getting his old job back.

It’s nice that Aubrey can riff on famous heist movies. However, since this case doesn’t really require any suavity or debonair behavior from our team, we have to take Aubrey’s word that he’s getting lifelong satisfaction out of the case.

In the C plot, Booth (David Boreanaz) has some eyesight problems and resists getting glasses. Since his identity is bound up with his past as a military sniper, this isn’t just vanity. However, after pressure from both Brennan (Emily Deschanel) and Aubrey, Booth goes to the eye doctor. The condition turns out to be temporary, but Brennan is turned on by Booth’s eyewear. In fact, it’s a good look for him – maybe we’ll get to see the special agent at least use reading glasses in the office.

For all the call-outs to THE PINK PANTHER (not for nothing does Rousseau rhyme with Clouseau) and TOPKAPI, “The Jewel in the Crown” doesn’t have the comedy or suspense of those inspirations. What it does have is some touching and genuine moments courtesy of Thyne and Conlin, which are well worth viewing.