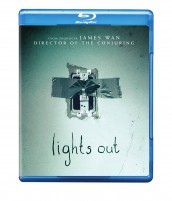 LIGHTS OUT highlights Blu-ray, DVD and Digital Releases for Oct. 25, 2016 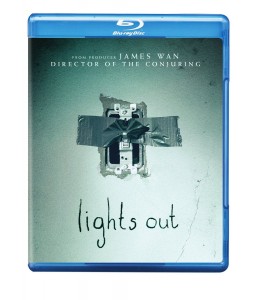 LIGHTS OUT – While this is billed as an indie horror flick, Warner Bros is the distributor so it can’t be that much of an independent production. That said, LIGHTS OUT is a really good horror flick. Based on a short video that went viral in 2013, LIGHTS OUT follows the story of Sophie (Maria Bello) that is obsessed with her imaginary friend Diana. So much so, she has alienated her kids and friends. It turns out that Sophie has been having a relationship with Diana for quite a while but Diana may not be imaginary at all but a gnarly shadow figure that has been ruining the family’s lives for years on end. While on the surface, the flick seems to another horror flick with ties to mental illness (much the same way the impressive BABADOOK did) but the twist here is that something really bad is going on and Diana is not to be trifled with. The cool thing here is that LIGHTS OUT uses the dark as almost a character itself in that you never know just where or when Diana will appear and the film is way dark so she could be anywhere. 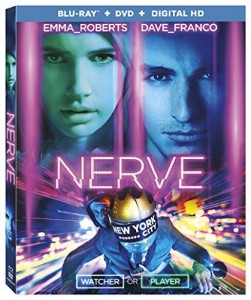 NERVE – NERVE is a pretty good flick that shows how today’s social media and explosion of smartphone apps causes a chaotic mix of reality and fantasy. NERVE is a game that people play on their smartphones where they are challenged by viewers to participate in a number of dares with a monetary reward. If they succeed they win money, but fail or refuse to complete the dare all the money they won is lost and they can’t continue in the game. Emma Roberts stars as Vee, a shy high school student that is at odds with her best friend over getting the nerve to do almost anything. Pushed too far, Vee signs up for the game and begins to accept dares along with fellow player Ian (Dave Franco). Of course, what begins easy enough with dares to kiss a stranger or try on an expensive dress, changes to life or death situations. While it has times where it appears as if you are watching just one long music video with crazy amounts of cut edits, the morals here are that be careful with social media as your actions to impact others. Something in today’s society is certainly relevant. 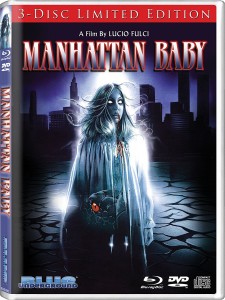 MANHATTAN BABY – Lucio Fulci is considered one of the masters of gore having directed the infamous ZOMBIE, GATES OF HELL and THE BEYOND. But like any director, not everything he did was not a winner. While MANHATTAN BABY is a jumbled mass of nonsense with a plot that limbs along and for some reason was directed in a weird style where every character gets extreme close-ups. It’s weird because there doesn’t seem to be any real reason for it. From what I can gather, the plot centers on an archaeologist and his family are studying ruins in Egypt when the daughter finds a strange amulet in the sand in a scene that takes far too long to get to the point with sand literally draining out of the kid’s hand second by second. At the same time the guy gets zapped in the eyes, cobras seem to appear out of nowhere all the time and scorpions scare the bejesus out of people constantly. The amulet apparently carries a curse and is causing all sorts of accidents to happen and sends the victims to another dimension. It’s so garbled and a mess that it is hard to make heads or tails as to what is actually going on half the time. Add to this a complete lack of gore from the master of gore and this one just fails to deliver. Still this is from Blue Underground and this is probably the best the film has looked maybe ever. So maybe for classic horror fans this might be worth their time. 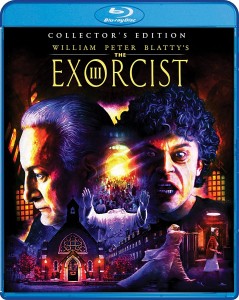 THE EXORCIST III – While Part 2 of THE EXORCIST franchise may not be well liked (or maybe even loathed by some), THE EXORCIST III is actually very loved by horror fans because it not just is a supernatural thriller but also a psychological drama as it pits a Washington D.C. cop (George C. Scott) that is tasked with solving a series of brutal murders that appear to have a religious connection. Instead of numerous horror scenes that made the classic film so impactful, part three instead goes for more atmosphere and spooky sound to gets it point across and it works well. Scream Factory distributed this title and included a number of new stuff including new audio interviews, new featurettes with Brad Dourif, interviews with the production design and a featurette on the music. There are all the legacy extras included as well. One minor point of contention is that this is a so-called “director’s cut” of the flick but it appears the parts added were recovered from source material that was unable to benefit from the new 2K digital cut.