Powerful performances and character moments, along with big surprises 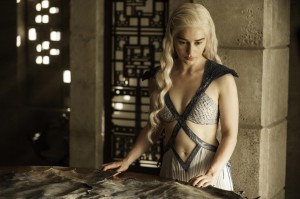 GAME OF THRONES is known for its “Holy !!!!” moments, and “Mockingbird” has more than its share. It also has moments that are deeply affecting and we once more find our sympathies being jostled by the complicated character of Sandor Clegane (Rory McCann), aka the Hound, and we’re right along with Daenerys (Emilia Clarke) in being confounded by figuring out the ethical course of action for her.

Daario Naharis (Michiel Huisman) sneaks into Daenerys’ chambers by night to ask her permission to kill her enemies – any enemies. Daenerys invites him to bed. In the morning, when Daenerys’ concerned and disapproving advisor Jorah Mormont (Iain Glen) passes Daario as Jorah enters and Daario leaves, Daenerys says she is sending Daario with the Second Sons to retake Yunkai and kill all the slavers. Jorah counters that it is better to show mercy – brutality is all the slaves know right now. Besides, he was once a slaver. Would Daenerys kill him? Daenerys relents and sends along Meereen noble Hizdahr to negotiate with the Yunkai – they can either release their slaves or die.

Stannis Baratheon’s wife Selyse (Tara Fitzgerald) meets with the priestess Melisandre (Carice Van Houten). Selyse doesn’t want to bring her young daughter along because the child is willful and doesn’t follow her mother’s religion. Melisandre says that their Lord wants the little girl to come with them.

At the Wall, Jon (Kit Harington) returns from wiping out the deserters, only to promptly be told to lock up his direwolf Snow and to have his suggestions concerning the Wildlings ignored by Alliser Thorne (Owen Teale). This does not bode well for the safety of the Night’s Watch.

Lady Brienne (Gwendoline Christie) and her squire Podrick (Daniel Portman) stop at an inn where Arya’s former companion Hot Pie (Ben Hawkey) is in charge of the meals. When Brienne asks if Hot Pie has seen Sansa Stark, Hot Pie decides to trust Brienne and says he’s seen Arya. This is big news, as everyone had assumed Arya was dead. Brienne and Podrick head toward the Vale, where Arya may have gone and where, for all they know, Sansa may be as well.

Arya (Maisie Williams) and Sandor are still traveling together, as he still believes he can bring her to her aunt Lysa (Kate Dickie) and get a reward. Sandor puts a dying man out of his painful misery, but is then set upon by Rorge (Andy Beckwith). Arya once saved Rorge from a fire – along with Jaqen H’Ghar and Biter – despite his threat to rape her. Rorge explains that there’s a bounty of a hundred silver coins on Sandor’s head as a result of Sandor killing six Lannister soldiers. Arya recalls Rorge’s threat and, once she learns his name, she kills him. She wants to cauterize Sandor’s wound, but he has a deathly fear of fire, ever since his older brother Gregor (Hafpor Julius Bjornsson) burned his face as a child for playing with some of Gregor’s toys; their father took Gregor’s side. Sandor says the physical pain was bad, but knowing it was his brother was worse.

Meanwhile, Gregor is in King’s Landing, enjoying himself executing prisoners while he waits to be Cersei’s (Lena Headey) champion in Tyrion’s (Peter Dinklage) trial by combat.

Tyrion is in the dungeon, and things look bleak. Brother Jaime (Nicolaj Coster-Waldau) is angry that Tyrion blew the deal Jaime had made for Tyrion’s life. Further, Jaime cannot be Tyrion’s champion, because left-handed, Jaime can’t win a fight. He and Tyrion commiserate – Tyrion is still appalled by Shae’s betrayal.

Tyrion’s erstwhile bodyguard Bronn (Jerome Flynn) arrives, but Bronn has been paid off by Cersei not to help Tyrion. Bronn is betrothed to a noblewoman, whose castle he expects to inherit once he’s managed to kill off her older sister. Bronn is open to Tyrion bribing him, but Tyrion has nothing in hand. When Tyrion asks why Bronn won’t fight for him – they’re friends, after all – Bronn points out that Tyrion has never risked his life for Bronn. Furthermore, Bronn is sensibly afraid of Gregor Clegane and while Bronn genuinely likes Tyrion, he likes himself more. Though the specific words aren’t said, Tyrion understand and accepts this as Bronn’s nature. They part on good terms. However, Tyrion is now sure he’s going to die.

Prince Oberyn Martell (Pedro Pascal) may not literally be the last visitor on Earth Tyrion is expecting, but his visit is unanticipated. Oberyn recalls seeing Tyrion when Tyrion was just a baby and Oberyn was a boy. Oberyn was told that he’d see a monster, but Tyrion was just a more or less regular infant. Gregor Clegane murdered Oberyn’s young niece and nephew before raping and murdering their mother, Oberyn’s sister Elia. Oberyn wants the opportunity to kill Gregor and, while he’s at it, thwart Tywin Lannister. Oberyn offers to be Tyrion’s champion. Tyrion’s eyes well up.

In the Vale, Sansa (Sophie Turner) makes a snow version of Winterfell. Robin (Lino Facioli) tries to “improve” it and wrecks it. When Sansa points this out, Robin has a fit and Sansa winds up slapping him. Robin is shocked and runs off; Sansa fears the consequences. Arriving on the scene, Baelish (Aiden Gillen) tells Sansa that actually Robin’s mother should have slapped him long ago. Baelish says that if only love ruled the world, he might have been Sansa’s father, as he had been in love with Sansa’s mother Catelyn. However, Baelish adds, Sansa is more beautiful than Catelyn ever was. To Sansa’s shock, Baelish kisses her.

To make things worse, the kiss is witnessed by Sansa’s aunt and Baelish’s new wife, the insanely jealous Lysa (Kate Dickie). Lysa tries to throw Sansa through the “moon door” to the ground far below, but Baelish swears he’ll send Sansa away. Lysa recounts all she’s done for Baelish – lying, murder – and Baelish says he’s only ever loved one woman in his entire life: Lysa’s sister. And then he throws Lysa out the moon door.

It’s not that we don’t know that Baelish is capable of murder and havoc – he not only had Lysa kill her husband and engineered Joffrey’s death, he effectively murdered Ned Stark when he had Lysa tell Catelyn that the Lannisters were behind Lysa’s husband’s death. However, having Baelish kill Lysa directly – and, moreover, breaking her heart in the instant before doing so – is one of those perfect, jaw-dropping moments that GAME OF THRONES does so well.

There’s also the matter of Baelish kissing Sansa. Yecch! And also, what the hell will Sansa do now? The poor young woman can’t catch a break.

On the wonder side, if Oberyn declaring himself Tyrion’s champion causes shivers of delight. It’s a great moment for Tyrion and adds to the impressiveness of Oberyn’s already captivating character. No need to go on yet again about Dinklage, but Pascal plays the Dornish prince with such fire, compassion and wit that he’s instantly memorable.

As for Daenerys, while it is worrying (on this show, trying to do the right thing is generally a recipe for disaster), her continued resolve to be responsible for those she has liberated is a quality that indeed makes her fit to rule. Her ability to be gracious – she not only allows Jorah to change her mind, but tells him to let Daario know Jorah has changed her mind – is further proof that she is not self-righteous, but genuinely righteous.

And Melisandre, being entirely kind and gentle with her visitor, manages to creep us out once more. Well done, Van Houten.

One rather minor carp: Gregor Clegane, aka the Mountain, seems to be shrinking. Bjornsson is the third actor to play the role, and along the way, Gregor has gone from just this side of a giant to a man who is tall, large and fit (in the manner of an in-shape pro wrestler), but not terrifying at first glance.

“Mockingbird” is filled with scenes that stay with you long after the episode is over. Long live GAME OF THRONES.