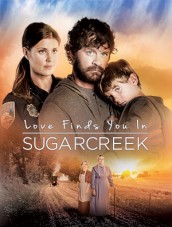 ©2014 Up
LOVE FINDS YOU IN SUGARCREEK
Interviews

Exclusive Interview: Sarah Lancaster on LOVE FINDS YOU IN SUGARCREEK 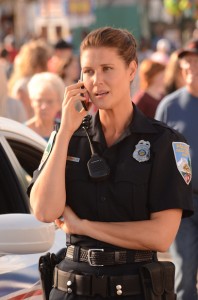 Sarah Lancaster in LOVE FINDS YOU IN SUGARCREEK | ©2014 Up

LOVE FINDS YOU IN SUGARCREEK, a telefilm shot in the real town of Sugarcreek, Ohio, has its premiere on Up Sunday June 1 at 7 PM. Sarah Lancaster (Ellie Bartowsky on CHUCK) stars as Rachel Troyler, who lost at her parents at an early age, was raised by and now lives next door to her Amish aunts, played by Kelly McGillis (who also famously played an Amish woman in WITNESS) and Annie Kitral. Although Rachel is not Amish herself, she is well-integrated into the friendly community, where she serves as a law officer. She is unprepared for her feelings when she meets outsider Joe Matthews, played by Tom Everett Scott.

Lancaster, born in Kansas and raised in Southern California, is present at a Q&A session that Up holds for the Television Critics Association. Afterwards, she remains to answer some follow-up queries.

ASSIGNMENT X: Now, you’re playing an essentially nice person in this, but is she perhaps a little harder-sided than Ellie Bartowsky?

SARAH LANCASTER: Essentially nice person, but Rachel definitely has an edge to her. Rachel is very guarded and went through a serious trauma early in her life and is in self-preservation mode in the beginning of this and certainly has a lot of love, certainly when it comes to her aunts, but she is guarded. It’s not Ellie Bartowsky by far.

LANCASTER: I think this is her first and only love. When Tom’s character enters the picture, it sort of flips her on her feet and she has to break down some of those walls and let herself be emotionally available.

AX: As a grown-up, how was it playing first love?

LANCASTER: I don’t know that I played “first love” – I think that I can relate to – certainly, there have been times in my life where I’ve been in self-preservation mode and not wanting to let people in. We all are just a bunch of memories and stories, right? And it impacts you daily and I’ve definitely been in Rachel’s head space in times of my life, so it was more about knocking down those walls and letting somebody see you for the first time.

AX: The way the Up executives were talking about you, it sounds like they came to you and said, “We want to be in the Sarah Lancaster business, what would you like to do?” Is that more or less what happened?

AX: Did you know it was going to be shooting in Amish country?

LANCASTER: Yeah, and that fascinated me as well. I got into this business to do interesting, cool things that otherwise I would never be able to do, and this is one of them. I mean, I was up in Amish country for five weeks. How many people can say that? [laughs]

AX: Did anybody there have any idea who you were from CHUCK? Because they don’t watch television …

LANCASTER: Well, the community itself is probably [largely] Amish. But there are non-Amish living there – there are restaurants, there is television, there are people who watch football on Sunday, which Tom was scrambling to find. So there was a portion of the community that recognized me from CHUCK or WHAT ABOUT BRIAN? or EVERWOOD or whatever it might be, and they were really tickled to have us in their town. It was really sweet.

AX: What have you been working on since CHUCK?

LANCASTER: Coming off of CHUCK, I had my baby. Oliver’s two now. So really, I took a little time to stay home and be with Oliver, and I kind of started to get the itch around springtime last year and that’s when I came back out. I just had a Christmas movie air with Hallmark Channel [FIR CRAZY], I did this, I have another Hallmark movie [LOOKING FOR MR. RIGHT] I did with Vivica A. Fox and Kip Pardue and then, biggest news, Robert Downey Jr. has a movie coming out next year called THE JUDGE and I play his soon-to-be ex-wife.

AX: Are you finally playing someone who is not a nice person at all, or is she just in opposition to Robert Downey, Jr.?

LANCASTER: They are in major opposition towards each other at the beginning of the movie. They both come full circle at the end – his character certainly. But yeah, I’m definitely stretching my wings this year, so that’s nice.

AX: Do you have any desire to play somebody who’s just a complete bitch?

LANCASTER: Totally [laughs], yes. It would be so much fun. I mean, I used to get cast as a bitch when I was blonde. Maybe I should go back to blonde.

AX: Are you happy with the way CHUCK wrapped?

AX: Was playing a new mom on CHUCK toward the end at all helpful preparation for being a new mom in real life?

AX: And is there anything else you’d like to say about LOVE FINDS YOU IN SUGARCREEK?