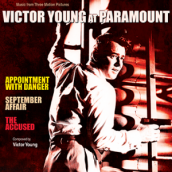 A thrilling collection of scores from an unsung studio composer

Kritzerland continues to mine for golden age soundtracks in the Paramount peak, doing impressive sonic excavations on many gems well past five decades old (practically pre-history in soundtrack terms nowadays), no more so than in their compilations celebrating fairly obscure work by composers during their tenure with the studio. Now Kritzerland follows up their “Franz Waxman at Paramount” album with this triptych featuring Victor Young, the prolific, and manly-sounding composer of over two hundred soundtracks (THE QUIET MAN and AROUND THE WORLD IN 80 DAYS among them) whose nevertheless best remembered tune today is the eternal song “When I Fall in Love.” We begin with the sweat inducing score to 1951s APPOINTMENT WITH DANGER, in which had Alan Ladd (the star of the Young-scored SHANE) as an intrepid postal inspector protecting a woman of the cloth who witnessed a fellow official’s murder. While there’s some pleasant ecclesiastical music at the start, Young’s pounding, and very concerned score even manages to make a Brahms excerpt seem like part of a perilous whole, with nearly every cue screaming of brassy danger from the evil likes of Jack Webb and Harry Morgan.

Young finds a far more romantic film noir approach to 1949s THE ACCUSED, as Loretta Young’s college professor tries to cover up a self-defense killing, all while of course falling for the detective out to catch the culprit. Young’s melody for the heroine is as lovely as it is dire, engendering a moving sense of violin-topped empathy for a no-fault murderess, an emotional approach that gives this score its attractive, tragic appeal.

Though the love of 1950s SEPTEMBER AFFAIR might have potentially dark roots as a star-crossed couple find they’re given new lives to pursue each other after mistakenly being pronounced dead in a plane crash, this is a score that offers Young at his most romantically sweeping – abetted by snippets of Kurt Weill and Maxwell Anderson’s “September Song.” Mandolin helps put Italian flavor into the Florence-set proceedings, with a beyond-lush orchestra sinking in the impossibly lofty romance of make-believe new lives that will undoubtedly be uncovered. Young demonstrates all of the musical beauty from an age when Hollywood wasn’t afraid of full-blown melodic passion, of which SEPTEMBER AFFAIR holds a renewed, gorgeous place thanks to this shining collection of Young’s work.