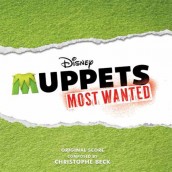 Animation has been a particularly well-suited realm for Christophe Beck to practice his melodically energetic way of giving an orchestra the frisky, bright vibes of pop music, a Pharrell-ish feeling of optimism as well as playfully ominous danger that’s recently helped to propel The Mouse House’s short PAPERMAN to an Oscar win before assisting in FROZEN‘s feature-length CGI-toon gold – a movie that’s made Beckthe box office champ of cartoon scoring as well. And if Beck can give animation the sensation of infectous happiness, than why not felt? Such is the antically pleasant spin he’s given to two Muppet movies, whose delighftul undercores are now gathered for the studio’s latest hardcopy partnership with Intrada Records. If there’s a reason that Jim Henson’s creations hit it big with audiences of all ages, then it’s due to the smart-assed humor he gave to what could’ve been child’s play, a rambunctiously dry vibe that Beck translates to these real-world toons. With Kermit mistaken for a doppelganger jewel thief in the MUPPETS MOST WANTED tracks the lead off the album’s first half, Beck plays up the danger of the police pursuing our gang with archly mysterious melodies, the moaning choruses of a Russian Gulag, as well as the heartfelt strains of a pig just trying to get her green amphibian to commit.

It’s broadly comic suspense and cliffhanging energy, all the speedy fun without the goofiness. Yet within the ludicrous context of pairing puppets with famed guest stars, Beck’s got the brassily dramatic conviction of the characters’ hand-controlled antics. The composer’s auspicious franchise start with THE MUPPETS is a somewhat lighter hearted affair, capturing a let’s-put-the-band-back together groove with a nicely distinctive main theme. Mix in spy-bop jazz and pokey pizicattos into the emotional through line, and “The Muppets” not only brings across the love that these iconic fuzzballs have for each other, but also the endearing emotional bond that audiences have had for the colorful gang for decades – as understandably hipped up for two wiseguy reboots in an kid movie circuit where knowing saire is increasingly king.