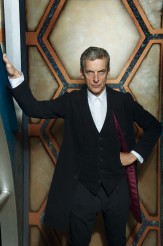 The new 12th Doctor is here and he is Brilliant! 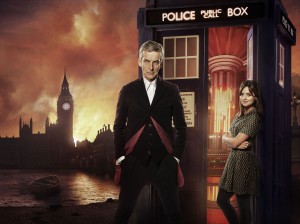 At Christmas time Whovians were given their first look at the 12th (or, erm, maybe 13th or 14th?) Doctor, Peter Capaldi. As the newly regenerated Timelord stumbled around the control room of his TARDIS and asked his companion Clara (Jenna Coleman) if she had any idea how to fly the time and space ship. That was it. That was all. There were a handful of photographs released, and yes there was a leak of a rough cut of the premiere episode “Deep Breath,” but most people had to wait until now to get a chance to settle in and get to know our new best friend.

“Deep Breath” sees the newly regenerated Doctor and Clara in Victorian England, where the TARDIS has been coughed up by a time displaced T-Rex. The pair of adventures are joined by my favorite trio of the newer episodes, Madame Vashtra (Neve McIntosh), Jenny (Catrin Stewart), and Strax (Dan Starkey). This team of super sleuths then embarks on a murder investigation with some interesting connections to The Doctor’s previous incarnations and opens the doors for some intriguing teases as to what is heading his way.

I’ll just get this out of the way, right off the bat. I loved the episode and I loved the new Doctor. Peter Capaldi is a brilliant actor, and he’s such a fan of WHO that he really “gets” the character. There’s humor, pain, seriousness, and a depth of soul to his portrayal of The Doctor that is really his own. He has elements of previous Doctors here and there, but this character is his unique take, and he OWNS it completely.

It’s always tough to start with a new Doctor. I know when Christopher Eccleston regenerated into David Tennant, I was livid and had no interest in continuing watching the show. Of course I then fell completely in love with Tennant’s 10th Doctor as did most of the Whovian fan base. So when it came time for Tennant to leave and Matt Smith stepped in as a younger, goofier Doctor; I was completely turned off again. Over the course of his first season, Smith won me over and I was terribly sad to see him go. Capaldi, though, is the first time I’ve been excited to see a new Doctor and to see what the new Doctor was going to bring to the table.

The dynamic of the show has changed as well with a new Doctor. Clara and The Doctor have an entirely new type of relationship. Gone is the constant flirting and vaguely sexual banter (thank God), and in its place is a kind of weary trust as they discover who each other are again in this new and old friendship. I have friends who have never really warmed to Clara as a companion, but now with the new Series they have told me that they are enjoying her for the first time. Clara found her sea legs for me in the WHO 50th Anniversary Special, and she’s been a favorite for me since then. I think that’s where they really solidified the character and what she was about.

One of the other nice changes to the feel of WHO this series, is that the writing has gotten more adult. Steven Moffat is a brilliant writer, and he just won an Emmy Award for SHERLOCK, but I’ve often felt that series like SHERLOCK get his “adult” writing style and WHO has gotten more of his “MTV generation” writing style. There have been criticisms since Moffat took over as show runner, that WHO was too much of a quick cut show. Everything was being fed to the audience in rapid fire bytes and exciting montages to convey the bigger picture. Now, with “Deep Breath” the pace seems to have slowed a bit, and for the better. The interaction between the characters is stronger, and this first episode wasn’t mired down in trying to entertain the audience with one battle or chase after another.

Not to say that our new Doctor isn’t physical. This first episode sees him horseback in a dressing gown, climb out a window, fall down a tree, take a dip in the Thames, and battle a killer robot in hand to hand combat.  Capaldi is an “older” Doctor but that doesn’t mean he isn’t going to be just as physical as any other Doctor.

Yes, there’s some discussion in the episode about The Doctor’s new aged face, his grey hair, and the fact that he is now Scottish. There appears to be a bit of an air of mystery around why this new Doctor has a face he has seen before, but only the writers know whether or not that particular secret will be revealed this Series.

Vashtra, Jenny, and Strax make this episode even more enjoyable with moments of humor, and then some really kick ass fighting. Honestly I think these three deserve their own spin-off series. I know, that I for one look forward to every appearance they make on the show. This time around we do get the black and white truth that Vashtra and Jenny are women married to each other, and the innuendo of previous episodes is all just put out there (which allows them to take it to another level of AWESOME).

I was fortunate enough to see this episode in the comfort of my own home on BBC America, and then be able to see it in the cinema as well. The cinema experience was really amazing, and there was a special mini-episode with Strax, Jenny, and Vashtra that was just for theatres. This mini-episode gave new viewers a bit of a look at the history of The Doctor’s incarnations with more than a touch of wry humor. Then post credits they aired the making of “Deep Breath,” which was also really entertaining. Of course, the best part of seeing WHO in the cinema is that DOCTOR WHO looks fan-fricking-tastic on the big screen! If you get the chance for a future episode screening, don’t walk, run to your local theatre!

Up next, “Into the Dalek.” New Doctor vs. his oldest foes. I’m there. ‘Nuff Said’

THE KING’S SPEECH is one of the Blu-ray and DVD Picks this week
CD Review: Peter Case - THE CASE FILES
Breaking News: HOSTAGES is a CBS experiment in shorter episode runs an...
THE FLASH: Jesse L. Martin on Season 3 - interview